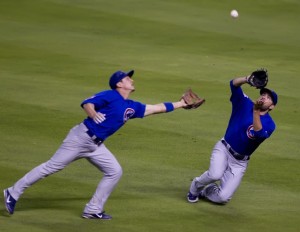 HOUSTON — Jeff Samardzija was one sliding catch away from possibly ending the Cubs’ losing streak. But when Darwin Barney knocked the ball out of David DeJesus’ glove, the Cubs’ first lead in eight days was gone, and there wouldn’t be another one.

The Cubs lost to the Astros, 5-1, on Wednesday night before a crowd of 18,732 and have lost nine in a row, matching their longest losing streak since the 0-14 start to the 1997 season. Their 15-29 record is the worst in the major leagues, and no one has declared they have hit rock bottom.

(PHOTO: Right fielder David DeJesus (9) of the Chicago Cubs, right, and second baseman Darwin Barney (15) both try to make a play on a ball hit by J.D. Martinez (14) of the Houston Astros in the fourth inning of their game on Wednesday, May 23, 2012, in Houston, Texas.)

“Things don’t always go the way you want them to, period,” Samardzija said. “You have to fight, adjust. You come out as a team, as individuals, and keep grinding to make the adjustment. That’s what it’s all about.”

Sooner or later, maybe the Cubs will remember how to hit left-handed pitching. The Astros’ Wandy Rodriguez (4-4) continued a season-long trend, holding the Cubs to Reed Johnson’s home run over seven innings. Rodriguez gave up eight hits but none in eight at-bats with men in scoring position.

When Johnson homered off Rodriguez in the first inning, it gave the Cubs their first lead since the fourth inning against the Phillies on May 16. They had gone 59 innings without being ahead.

Johnson’s homer was only the third of the season for the Cubs against a left-hander. They entered the game hitting .222 against lefties, which ranked 14th in the NL, and had the league’s lowest slugging percentage against lefties, at .296.

“(We’re) aware of that,” said Cubs’ bench coach Jamie Quirk, who ran the team while manager Dale Sveum attended his son’s high school graduation. “(Hitters) read the numbers. Wandy Rodriguez, he’s a good pitcher. … We haven’t hit lefties well all year. If we had an answer, a solution, we’d definitely bring it out.”

Facing Rodriguez, the Cubs’ lineup did not include slumping first baseman Bryan LaHair, who is hitting .095 vs. lefties, or regular third baseman Ian Stewart, who is hitting .174 against them.

Starlin Castro, who had two of the Cubs’ eight hits off Rodriguez, is a .400 hitter against lefties. But he hasn’t had much support from his teammates, including Alfonso Soriano. He was 0-for-4 in the cleanup spot, making the last out of an inning three times, twice with runners in scoring position.

Before the Astros broke things open with a three-run ninth off closer Rafael Dolis (which Quirk blamed on “rust” from his not pitching enough), the game turned on how hard Barney tried to catch up to a slicing blooper from J.D. Martinez off Samardzija (4-3) in the fourth inning.

David DeJesus raced in to make a play and had the ball in his glove for an instant before Barney arrived and knocked it out. Neither player was injured, but as the ball rolled away both Carlos Lee and Chris Johnson scored, the latter making it from first base without a throw to the plate. Martinez wound up with a triple.

“It was a great effort,” Quirk said. “If they had made the play, it was an outstanding play. He didn’t hit it good. He hit it to the right spot. They both gave it everything they had.”