Granger injured, and the game didn’t go well for Pacers either 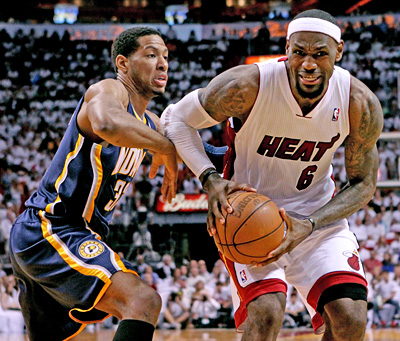 MIAMI — The question, posed to Indiana coach Frank Vogel before Game 5 on Tuesday, was simple: What does his team need to do to win? Vogel rattled off several key points:

He stressed the Pacers must keep the Heat out of transition. Vogel then watched LeBron James and Dwyane Wade blitz Indiana on the break, combining for seven dunks or layups (mostly in transition) during a 33-15 stampede that began just before halftime and stretched until late in the third. Overall, the Heat outscored Indiana on fast-break points 22-2.

(PHOTO: LeBron James of the Miami Heat is fouled by the Indiana Pacers Danny Granger in the third quarter during Game 5 of the NBA Eastern Conference semifinals, Tuesday, May 22, 2012, at AmericanAirlines Arena in Miami, Florida.)

Vogel also said: “We need to make LeBron and Dwyane score over us.” Instead, Wade and James often scored in the paint in a variety of ways.

And Vogel said: “We got to win the rebounding battle, too.” The Heat then outrebounded the Pacers 49 to 35, with Mario Chalmers — of all people — grabbing a career-high 11 boards.

What’s more, the Pacers lost Danny Granger — their leading scorer the past five seasons — to a left ankle injury. He limped off late in the second quarter, after missing a three-pointer and landing awkwardly on James’ foot.

He went to the locker-room with 2:48 left in the second quarter, returned to start the second half, but left for good with 8:49 remaining in the third and the Pacers down 11.

Granger, wearing a boot on his left foot after the game, said he did not know if he will be able to play in Game 6 on Thursday.

“It depends on how fast I recover,” he said. “I have a history of recovering fast. I’ll take a bunch of pain medication. It’s too important (not to play).”

Down 41-38 with three minutes to go before halftime, the Pacers missed 19 of their next 24 shots over the next 14 minutes. During that drought, the Heat extended its cushion to 21. Meanwhile, the Pacers allowed the Heat to shoot 61 percent from the field.

It all added up to a 32-point Heat rout.

“They kicked our butts (Tuesday night), clearly,” Vogel said. “They knew we were going to pound the ball inside. They stepped up their defense and put more focus on our inside game.”

Battier scored 13 points and played stout defense on Pacers power forward David West, who opened 0 for 5 and closed with 10 points (5-of-13 shooting) and four rebounds. Pacers center Roy Hibbert finished with just eight points on 3-of-10 shooting, though he did have 12 rebounds.

“We couldn’t get it down low, so we went to other stuff,” Hibbert said.

Except for Granger, the Pacers did not react angrily to Haslem’s flagrant foul on Tyler Hansbrough, which puts Haslem at risk of a possible suspension for Game 6. Hansbrough said he did not know whether Haslem’s foul warranted a suspension, but “it was a pretty hard foul. I got hit in the face.”

Granger said of the foul: “It was bad (live). It was three times worse (on tape). It was just as dangerous as what Metta World Peace did to James Harden.”

The Pacers were upset because fans threw objects at them late in the game.

“To have things thrown at you is disrespectful,” Pacers guard George Hill said.