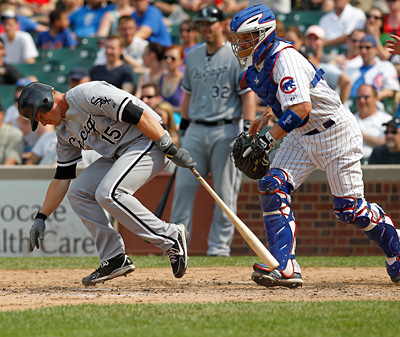 CHICAGO — Maybe the next trade the White Sox need to make is U.S. Cellular Field for Wrigley Field.

On their way to sweeping the Cubs with a 6-0 victory on a wind-swept Sunday, the White Sox clubbed three more home runs, giving them eight for the first round of the City Series.

So on one weekend at Wrigley the South Siders won three games, compared with only seven in 19 tries at the Cell.

Then there’s the Cubs, a rebuilding team for which Wrigley Field has become the not-so-friendly confines when the wind favors hitters.

They are 0-2 when the wind is blowing straight out, as it was Sunday. And the bad news for the Cubs is that it’s not even summer yet, although Sunday felt like it.

Cubs manager Dale Sveum looked at the flags, stiff in the morning wind, and said, “You’ve got a chance to have one of those freaky days.”

It turned into a one-sided freak show, with Gordon Beckham, Adam Dunn, and Tyler Flowers giving the Sox half their runs on homers off starter Paul Maholm.

Flowers’ fifth-inning shot became the first this year to clear the left-field bleachers and land on Waveland Avenue.

“The elements have been favorable to hitters and we took advantage of it,” Flowers said.

White Sox starter Jake Peavy has been around long enough to know how to pitch against the Cubs, in Wrigley Field or not, wind or not. He is 5-0 with a 1.42 earned-run average in his last five starts against them.

Peavy went 61/3 innings, allowing three hits — all singles — only three fly balls to the outfield, none of them in danger of clearing the wall.

“It wasn’t an ideal day to pitch, I can tell you that,” Peavy said. “We somehow got through it and it was a great team win.”

Sveum said, “You know Peavy is going to be tough, he’s one of the best pitchers in the league. But with that wind, the way it was blowing, we thought we’d have some contact and get it up in that wind, and at least a solo home run or something.”

But Sveum is learning the truth about his offense, especially compared with the White Sox’s, which was without injured cleanup hitter Paul Konerko for a second straight day. For the season at Wrigley, no matter which way the wind blows, the Cubs have been outhomered 24-12.

“It’s tough when basically you only score in two of 27 innings,” Sveum said. “We didn’t score a run off their starters this whole series.”

Actually, the Cubs did score twice off Friday starter Philip Humber, but they hit only two homers in the series, the same as Dunn and Beckham had by themselves.

To make matters worse, Peavy’s personal offense was better than the Cubs, as he drove in a run and scored a run Sunday.

About the only bad news for the Sox on Sunday was a security guard confiscating a fan’s broom during the eighth inning, which is about as close to any trouble as there was all weekend, despite the presence of the NATO summit and its tag-along protesters.

Now that they are back to .500, thanks to the Cubs, the Sox have big thoughts.

“For us, any time you get a sweep, it’s huge,” Dunn said. “It doesn’t matter who it is. Our ultimate goal, believe it or not, is not to win the (BP Crosstown) Cup. It’s to play into October.”

This series has become as lopsided as Sunday’s score and the fans seem to have taken notice. Only 38,374 visited Wrigley Field on a perfect sultry Sunday afternoon, and many of them wore Sox black. Maybe Cubs fans stayed away because they remembered the last Sox sweep at Wrigley Field.

That was June 11-13, 1999, and the Cubs immediately lost 17 of 22 games to fall from second place to sixth place, which is where they finished the season.