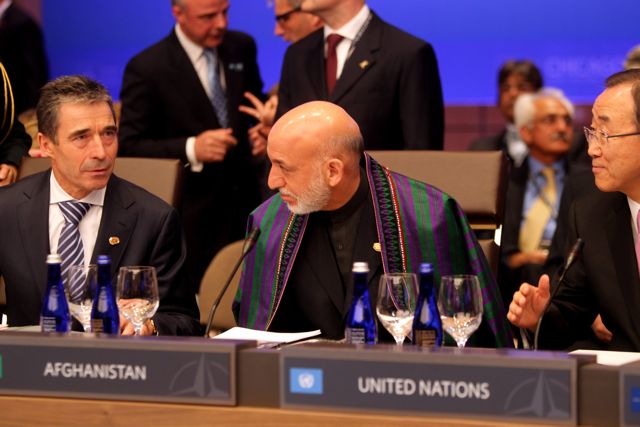 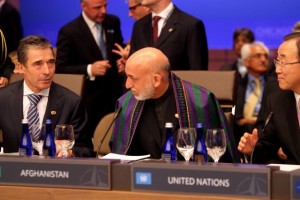 CHICAGO — NATO leaders on Monday adopted President Barack Obama’s exit strategy from the nearly 11-year-old U.S.-led intervention in Afghanistan, cementing an “irreversible” pullout of foreign combat troops that will leave Afghan security forces with the leading role in combat operations by the summer of 2013.

“We are now unified to responsibly wind down the war in Afghanistan,” Obama declared at a news conference at the close of the two-day summit in his hometown, while acknowledging that serious risks persist. “Afghans can take responsibility for their own country so our troops can come home.”

The exit plan leaves Afghanistan facing grave uncertainties: Can its forces take over the main fight against the Taliban-led insurgency and avert a resurgence of the mayhem that raged before the 2001 U.S.-led invasion, allowing al-Qaida to establish a virtual parallel state in the country?

The strategy also means that Afghan President Hamid Karzai’s weak government will conduct a 2014 election for his successor as the last U.S. and allied combat forces are leaving, potentially jeopardizing the country’s first peaceful transfer of political power.

Obama and the 27 other leaders of the alliance, however, are confronting intense pressure from war-weary publics to bring their troops home and focus on restoring growth and creating jobs amid Europe’s intensifying financial crisis and overstretched national budgets.

For Obama, the strategy has required a delicate balancing act in the midst of a re-election fight clouded by a weak U.S. economic recovery: He must bow to the majority of Americans, who oppose the war, while reassuring Karzai and his people that the United States won’t abandon them as it did after the 1979-89 Soviet occupation.

“I think it is the appropriate strategy whereby we can achieve a stable Afghanistan that won’t be perfect,” Obama said. “We can pull back our troops in a responsible way, and we can start rebuilding America and making some of the massive investments we’ve been making in Afghanistan here back home, putting people back to work, retraining workers, rebuilding our schools.”

Responding to concerns that the withdrawal of U.S. combat power may be premature, Obama acknowledged that the Taliban remain “a robust enemy.” But he added that he’s satisfied with assessments by White House military advisers who served in Afghanistan that the strategy will work.

“I can’t afford a whitewash. I can’t afford not getting the very best information in order to make good decisions,” he said. “The Afghan security forces themselves will not ever be prepared if they don’t start taking … responsibility” for the country’s security.

The U.S. intelligence community, however, has warned that the gains made by the 2010 surge of some 30,000 American troops into the Taliban strongholds of southern Kandahar and Helmand provinces could be lost as those forces are withdrawn at the end of this summer.

The summit also ended without a resolution to a dispute between the United States and Pakistan over reopening NATO supply routes through Pakistan to Afghanistan.

The strategy adopted on the final day of NATO’s largest-ever gathering calls for the alliance’s 130,000-strong U.S.-led International Security Assistance Force to complete a handover to Afghan security forces of the lead role in combat operations across the country of 31 million by summer 2013.

The coalition will assume a supporting role as it completes a phased withdrawal by the end of 2014. The White House and Pentagon are still deliberating over the number of U.S. troops who would remain after 2014 to train Afghan troops and police, provide logistical and intelligence help and conduct raids against al-Qaida.

The United States succeeded in winning from allies pledges to provide nearly all the $1.3 billion in annual funding it was seeking to support 352,000 Afghan forces through 2017, when that number of troops is to drop to 228,500, U.S. officials said.

But major hurdles remain. They include whether Kabul can fulfill its pledges in the new strategic agreement to guarantee free and fair elections — Karzai’s 2009 election to a second term was fraught with fraud and record violence — along with cracking down on corruption and ensuring the rights of women and minorities.

Even more uncertain is whether Afghan security forces will be able to take over the leading role in the fight against the Taliban-led insurgency, and whether a U.S. effort to broker peace talks between Kabul and the insurgents can be revived since the Taliban withdrew in March.

“At the end of the day, our strategy going forward is based on a series of very aggressive wishful assumptions,” said Michael Waltz, a senior fellow at the New America Foundation who served as a U.S. special forces commander in Afghanistan. “This is all assuming a hell of a lot of risk.”

The summit also was overshadowed by an unresolved dispute over the reopening of NATO supply routes with Pakistan, which closed them in November after U.S. forces in Afghanistan accidentally killed 24 Pakistani troops on their side of the border.

The administration had invited Pakistani President Asif Ali Zardari to the summit in hopes that would help clinch agreement on reopening the corridors from the Pakistani port of Karachi, but differences persisted over how much the United States will pay per container.

Obama refused to meet formally with Zardari, and he made no mention of Pakistan in opening the Monday morning summit session with statements welcoming Karzai and officials from Russia and Afghanistan’s Central Asian neighbors.

Obama did, however, have two brief informal chats Monday with his Pakistani counterpart, once as they entered the morning session and again as they and Karzai gathered for a photograph with the other summit participants, U.S. officials said.

“I emphasized to him … that we think that Pakistan has to be part of the solution in Afghanistan,” Obama said, adding that while there were no expectations that the route dispute would be resolved during the summit, there had been “diligent progress” toward that end. “President Zardari shared with me his belief that these issues can be worked through.”

In what served as an unintended reminder of his decision to withdraw France’s 3,300 troops at the end of this year — a year ahead of schedule — newly elected President Francois Hollande arrived late at the session, taking his seat after Obama spoke.