Bob Ford: Age on Celtics’ side in Game 1 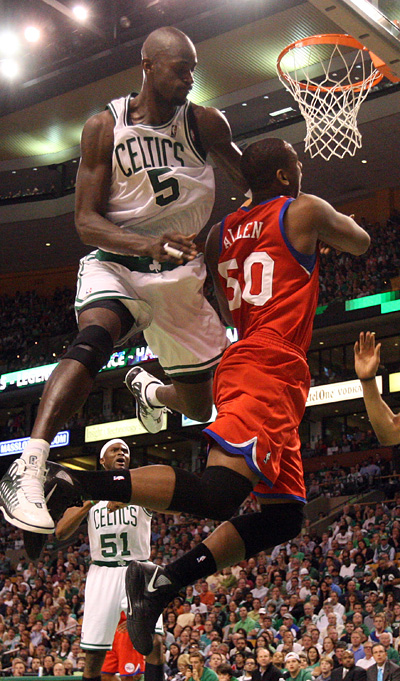 By Bob Ford, The Philadelphia Inquirer –

BOSTON — It was only the first act of a show that seems headed for a long run, but the first game of the Eastern Conference semifinals between these ancient basketball rivals laid out the plot very plainly.

This is Youth vs. Age, Energy vs. Experience, and, ultimately, the Future vs. the Past.

Give the first battle to the Boston Celtics, who had to come back from a deep hole to survive in their home arena, 92-91. Boston trailed by as many as 13 points in the first half, looking slow and uninspired in doing so. The Celts rallied in the second half, took the lead, lost it again, trailed by 10 early in the fourth quarter, and then willed themselves to the late victory.

The loss was a particularly tough one for the Sixers to take, if only because it seemed there for the taking for so long. They could do everything they wanted, but they couldn’t contain Kevin Garnett, who will turn 36 on Saturday, and they couldn’t keep a slumbering Boston offense from awakening.

This was a riveting start, and it promises to be a riveting series, if only to have the questions that it poses answered for the time being. Will Youth triumph? Will Experience find a way? Will the Future arrive and the Past be dismissed?

The 76ers didn’t do anything against the Boston Celtics on Saturday night that was new or surprising. Their strength is that they “keep doing it, with the hope that the opposition will grow tired of fighting through it.

Before the game, Boston coach Doc Rivers said his main concern in the opener and the series was the Celtics’ ability to keep the Sixers from getting out and running on the fastbreak.

“If it’s a track meet, that’s not going to be good for us,” Rivers said. “We’ve got to turn it into a game we can dictate. That’s hard to do, but we have to do it.”

As it turned out, he was worried about the wrong thing, at least in the opening quarter. What he should have been worried about was his team’s willingness to plow through the Sixers’ defense and get something other than a jump shot.

As the Sixers went out to a 28-18 lead after the first quarter, they had a few fastbreak points, but only a few. Instead, the Sixers shot well from the floor — exceptionally well for them — and the Celtics were settling for jumpers and missing them badly. Without getting inside position, the Celtics also were not getting any offensive rebounds, and their offense was usually one-and-one.

Almost any team will look good compared to that, but the Sixers looked good in their own right, moving the ball easily to the open man and getting rewarded. Just to prove how well things were going, Andre Iguodala hit a pair of three-pointers and led the Sixers with 10 points.

The game couldn’t go quite like that forever, and Rivers kept shuffling and reshuffling his lineup, looking for a combination of inside game and perimeter that would produce more offense. When the Sixers cooled off, the Celtics made enough shots at the beginning of the second half to take the lead and watch it grow to four points, 53-49.

They couldn’t maintain that pace, however, and it looked like a game between one team too young to know how to put away the opposition and the other too old to make that matter. So the game was still very close as it went into the final minutes, and it would be surprising if that isn’t the case for the rest of this series. And it would be even less surprising if the two teams didn’t use all seven games to decide whether this will be a victory for Youth or Age.

The Celtics are banged up at key positions and their three veteran stars, Paul Pierce, Kevin Garnett, and Ray Allen, are closer to the end of the road than the beginning. Unspoken is the thought that this could be the last hurrah for that group. It has to be on their minds, however.

“It should be,” Rivers said. “They understand who we are and where we are at this point of our run. It’s not anything you ever talk about, but we’re all pretty smart people. We understand.”