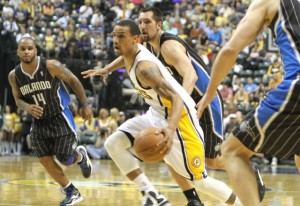 (PHOTO: The Indiana Pacers’ George Hill, middle, brings the ball up court against the Orlando Magic during Game 5 in the Eastern Conference first-round series against the Indiana Pacers on Tuesday, May 8, 2012, at Bankers Life Fieldhouse in Indianapolis, Indiana. The Pacers eliminated the Magic, 105-87.)

Undone by fatigue during an atrocious fourth quarter, the Magic lost to the Indiana Pacers, 105-87, on Tuesday night in Game 5 of the teams’ playoff series. The defeat ushered in an offseason that has the potential to become just as turbulent as the regular season that preceded it.

Will Stan Van Gundy and his assistant coaches return? What about General Manager Otis Smith? And what about Dwight Howard, as well as restricted free agent-to-be Ryan Anderson and potential free agent Jameer Nelson?

“I want to come back,” Van Gundy said. “But, you know, it’s not up to me. As far as the speculation, I would say the same thing I’ve been saying all year: Who gives a damn?

“I mean, they’ll make a decision when they make a decision. I’m not going to worry about it, I’ll tell you that. As long as I’m coaching, I’ll continue to do my work and get ready for next year. And if they want to make a change, make a change. That’s up to them.”

On Tuesday night, just as they had all postseason, the Magic fought as if they believed they could win the series.

They took a 71-69 lead into the fourth quarter, but the taller, deeper, more talented Pacers dominated them over the final 12 minutes.

Nelson, who scored a game-high 27 points, began the fourth quarter on the bench after he had played the entire third quarter. By the time Van Gundy put Nelson back into the game with 9:33 to go, Darren Collison, Danny Granger and David West already had given Indiana a 78-73 lead.

Although Orlando pulled within 80-78 on a J.J. Redick 3-pointer, the Pacers outscored them 25-9 the rest of the way.

“At that point, you can’t run out of gas, and you’ve just got to play through it, whatever’s going on,” Nelson said. “I thought we tried.”

Almost all NBA observers expected the Pacers to win the series. But the Magic made the series more competitive that many had predicted. They won Game 1, led Game 2 in the third quarter and staged a 19-point rally to force overtime in Game 4.

“This, honestly, hurts more than I can remember in a few years, maybe going back to the year we made the (NBA) Finals,” Redick said.

“The whole notion that we fought the good fight or we gave it a valient effort is B.S. to me. I think we had our chances to win. Give them credit, because they wore us down.”

Granger finished with 25 points, while Collison scored 15 of his 19 points and dished out three of his six assists in the fourth quarter.

And the Pacers scored 18 fastbreak points. The Magic had none.

“We were very resilient,” West said. “We knew they would keep coming after us and we knew we would have a hard time shaking them.”

The Magic will ask themselves whether they would have won the series if Howard had been healthy. He would have made a difference, no question.

As they left Bankers Life Fieldhouse, Magic players fielded questions about their team’s future. Nelson isn’t sure whether he will invoke his player option or become a free agent.

Segments within the organization believe the front office, led by CEO Alex Martins and Chairman Dan DeVos, will make a coaching change.

“I think he’s a great coach,” Anderson said. “I love playing for Stan. I think he’s done great things with this team. He’s taken a group of guys and really had us play hard and gave us great confidence.”