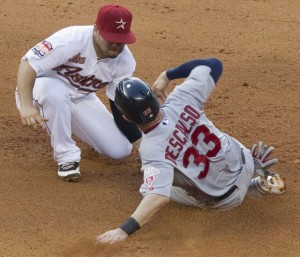 HOUSTON — Bud Norris was 6-2 with a 2.37 earned-run average against the Cardinals. Jaime Garcia was 0-3 and 6.39 against the Houston Astros. How did you think this was going to turn out?

(PHOTO: Jose Altuve (27) of the Houston Astros tags out Daniel Descalso (33) of the St. Louis Cardinals s he tries to steal second in the fifth inning of their game on Saturday, May 5, 2012, in Houston, Texas.)

After Houston righthander Norris allowed an unearned run in the first inning, he didn’t allow a hit in the next five en route to an 8-2 victory that was the Astros’ fifth in a row and second in two nights against the Cardinals. The Cardinals have lost three in a row for the first time this season. They last did so Aug. 22-24, before they began their miraculous run to the World Series title.

The score was even somewhat misleading because Cards center fielder Jon Jay, whose back-to-back defensive games would rival those of any outfielder ever, made two more saves on sure extra-base hits, running his total to five burglaries in two nights.

For much of the Astros’ first inning at Minute Maid Park, Garcia (2-2) had trouble locating the strike zone. From bouncing his first curveball about seven feet in front of the plate, Garcia proceeded to load the bases on walks with two outs. Then, he began throwing strikes, as in two quick ones to Chris Johnson. The third one wasn’t supposed to be a strike, but it was and Johnson launched his first grand slam into the Crawford (Street) boxes atop the left-field wall and the Astros had erased the Cardinals’ 1-0 lead.

Garcia (2-2) got better after the first inning, though he allowed two more runs in the fourth, but it was far too late.

“It was a terrible job there,” Garcia said. “I didn’t get the job done, and they got me. I didn’t give my team a chance to win. The worst thing you can do is you walk guys. I had him two strikes and I didn’t execute the pitch I needed to. Terrible job.”

According to catcher Yadier Molina, the pitch was supposed to be “on the ground,” as in well out of the strike zone.

“One pitch and they made him pay,” Molina said.

Cardinals pitching coach Derek Lilliquist pointed to Garcia’s walking lefthanded-hitting Brian Bogusevic, the second hitter of the game, as one of the keys to the inning after Garcia had struck out the pesty Jose Altuve.

“He just wasn’t controlling the counts,” Lilliquist said. “He had a shot to get out of it at 0-2 (on Johnson). But he didn’t get the execution he wanted.”

Asked if he wanted Garcia to throw a strike on 0-2, Lilliquist responded, “Absolutely not.”

The coach concurred that Garcia had improved after the first, but he said, “For the most part, we needed better tonight.’

Matheny thought Garcia was “completely out of rhythm. He had a lot of trouble finding it. A lot of (pitch) movement is a blessing and curse. Sometimes, it can run you off the plate if your timing isn’t perfect. But he was one pitch from getting out of it.”

Addressing Garcia throwing a strike when he meant not to, Matheny said, “He was feeling for the strike zone, let alone trying to feel for throwing it out of the strike zone.”

Rafael Furcal, scoring in the first inning for the fifth straight game, singled to left center to start the game and scooted to third as third baseman Johnson allowed Jay’s grounder to get past him for a two-base error. Matt Holliday struck out on an off-speed pitch, but former Astro Carlos Beltran, booed lustily, singled hard to right, to score Furcal.

It has been eight years since Beltran left to sign with the New York Mets, but Beltran said the fans apparently “haven’t turned the page.’

With his sixth consecutive single in a first inning to lead off the game, Furcal became the first Cardinal to do that since Lou Brock in 1974.

With the Cardinals already down 6-1 in the fourth, Jay raced into right-center and laid himself out to pull in Altuve’s almost certain extra-base hit.

Jay then turned in another gem in the sixth when he went to the left-center-field warning track to make an over-the-shoulder grab of Jed Lowrie’s drive before toppling to the ground.

“Jon Jay’s playing a terrific outfield,” Matheny said. “We’ve got to be careful with him beating his body up. He’s flopping all over the place. He’s making some incredible catches.”

Norris, who allowed some hard-hit balls that weren’t hits, had a control blip in the Cardinals’ sixth when he walked the bases loaded, sandwiching a double steal by Furcal and Holliday.

With two outs, Molina was right on the first pitch to him but fouled it back to the screen. But after not getting the call on a possibly low and outside pitch, Molina grounded into a forceout on the 1-2 offering.

Matheny thought the entire at-bat had been changed by the 1-1 call from Scott Barry, but Molina said: “That wasn’t the game. He called it a strike because he thought it was a strike.”

After the Cardinals scored another unearned run in the eighth, the Astros added a run … no, wait, make it two … in their half of the eighth when Lowrie’s run-scoring double to left off J.C. Romero became a two-run homer to left when Jerry Meals’ crew checked the replay.

Asked if he had any reason for the Astros’ dominance against him, Garcia said he didn’t have one.