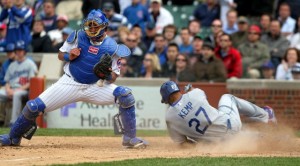 CHICAGO — Dee Gordon nearly knocked Chicago Cubs pitcher Paul Maholm out of the game Friday when the shortstop lined a ball that struck Maholm in the right leg in the sixth inning.

It was one of the few times the Los Angeles Dodgers were able to get good wood on a pitch from Maholm, who otherwise stymied most of the Dodgers batters except for Jerry Hairston Jr., who was a double shy of hitting for the cycle.

(PHOTO: Chicago Cubs catcher Geovany Soto can’t handle a throw from the outfield as the Los Angeles Dodgers’ Matt Kemp (27) scores on a sacrifice fly in the eighth inning at Wrigley Field in Chicago, Illinois, on Friday, May 4, 2012. The Cubs won, 5-4.)

Maholm finished the sixth inning and then the Cubs’ bullpen held off a Dodgers’ comeback enough to give Chicago a 5-4 win and hand the Dodgers their third loss in four games on their current trip.

As new Dodgers President Stan Kasten looked on, the Dodgers’ newest player, Bobby Abreu, came to the plate with two out in the ninth inning, a runner on first base and the Dodgers trailing by a run.

“When he first hit it, I thought it was in the gap,” said Dodgers Manager Don Mattingly.

Although the Cubs (10-16) entered the game with one of the worst records in baseball, Maholm extended his stellar performance of late on a chilly, windy day.

After starting the season poorly, the left-hander has won his last three starts, during which he’s posted an earned-run average of 1.47.

“You’ve got to give credit to him,” said Dodgers right fielder Andre Ethier, whose sacrifice fly in the eighth inning gave Ethier his 28th run batted in, tops in the big leagues.

“Obviously he’s made adjustments,” Ethier said of Maholm (3-2). “He kept guys off balance, was good on both sides of the plate, lots of different arm angles. I don’t think anybody other than Jerry really squared up the ball well off of him.”

Indeed, after Dodgers starting pitcher Chad Billingsley gave up two runs in the first inning, Hairston hit a solo home run into the left-center-field stands, his first homer as a Dodger.

Hairston also singled in the fifth inning and tripled down the right-field line in the seventh inning off Cubs reliever James Russell, scoring Ethier, who had doubled.

“I just tried to hit the ball hard anywhere,” Hairston said. As for his home run, “Luckily, I hit it low enough; the wind was kind of howling today. I know this place and it was one of those days where the wind can be crazy.”

Billingsley (2-2) took the loss after giving up four runs and eight hits in six innings. DeJesus got Chicago rolling against him with a leadoff double in the first inning, and DeJesus tripled in the fourth inning to drive in a run.

Billingsley also gave up a solo home run to pinch-hitter Joe Mather in the sixth inning.

“I overall felt really good, I just made some mistakes over the plate,” Billingsley said. After the Cubs’ two-run first inning, he added, “I tried to keep them right there.”