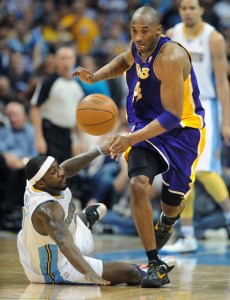 DENVER — Was it altitude, or attitude?

Were the Los Angeles Lakers breathless, or bored?

Championship-caliber NBA teams finish off first-round playoff series as quickly and efficiently as possible, understanding that the quicker they get off the floor in early May, the stronger and healthier they will be in early June.

(PHOTO: The Los Angeles Lakers’ Kobe Bryant, right, steals the ball away from the Denver Nuggets’ Ty Lawson but is called for a foul in Game 3 of the Western Conference first-round series in Denver, Colorado, on Friday, May 4, 2012.)

Does what happened at the Pepsi Center on Friday mean that these Lakers are not a championship-caliber team?

Or were they just being lazy, which is absolutely crazy?

Whatever it was, it was a huge splotch of ugly on the Lakers’ emerging postseason tableau. Despite not having a lead in the first two games of this series, the Denver Nuggets raced to a 41-17 edge early here — that is not a misprint — and eventually rolled to a 99-84 victory.

“Obviously, I would like to have seen us come out with a lot more energy,” said Lakers Coach Mike Brown.

It’s one thing to lose a hard-fought game to an equal opponent. It’s quite another to fail to show up for what could have essentially been a series-clinching game against an outmanned opponent playing its first game in front of a home crowd that didn’t show up all that enthused. It’s one thing for the Lakers to lose this game, it’s another for them to fail to even compete for large stretches of it.

Check out the Miami Heat against the New York Knicks. Have you been watching the Oklahoma City Thunder against the Dallas Mavericks? In both cases, Goliath has won three straight games against David. If the Lakers are going to play in that league later this postseason, they will need similar intensity and energy that was missing Friday night.

“Dig in!” shouted the Pepsi Center public-address announcer, and eventually everyone did, from the Nuggets’ Ty Lawson with 25 points, to Kenneth Faried and JaVale McGee with 15 rebounds, to a crowd that stood and waved blue towels and booed the heck out of Kobe Bryant.

The Nuggets dug, but it was the Lakers who gave them the shovel. Like that fighting fan in the Bryant jersey who was hustled away by security guards amid chants and boos, there were times the Lakers simply disappeared.

Gone is the notion that these Lakers have completely flipped the switch on a shadowy regular season. Gone is the idea that this loose group has completely matured into a gritty team under the guidance of Coach Mamba.

And gone, at least for the moment, is the idea that Andrew Bynum is unstoppable.

Once again, Bynum proved that he can be shut down and frustrated and turned into a petulant kid again. Once again, he showed that the only person who can consistently inflict all this damage upon him is himself.

This is not to blame the entire loss on Bynum. None of the Lakers seem particularly interested early, or particularly resilient late. But the big man was in the middle of the collapse before appearing to mentally take himself out of the comeback.

During a first half in which the Nuggets went on a 19-0 run while flowing the offense over and around and through him, Bynum was notably absent, scoring zero points on just three shots. When he finally and angrily got his act together in the second half, he let his temper undermine his focus, leading to an incident late in the third quarter that effectively halted the Lakers’ comeback.

With less than three minutes left in the third quarter, McGee blocked a Bynum jumper in what appeared to be goaltending. The ball flew back to Sessions, who hit a jumper to cut the lead to five, but Bynum never noticed, as he was screaming at the referees for the apparent goaltending. He was still screaming during the timeout, acting foolishly distracted for a guy on a team that just crept to within striking distance amid a potentially huge comeback.

“He’s a grown man, he’s got to be put in situations when he can figure things out,” said Brown.

The Lakers never had much momentum again.