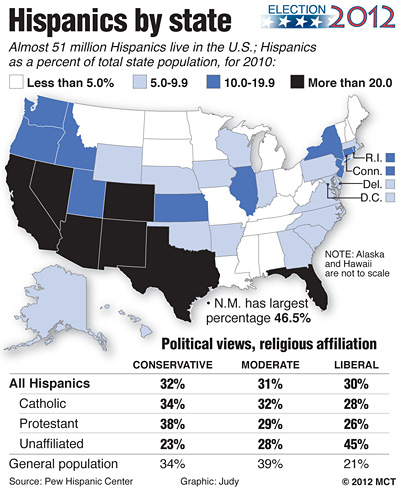 SCOTTSDALE, Ariz. — Mitt Romney has a problem with Hispanics.

The presumptive Republican presidential nominee trails Democratic President Barack Obama among Hispanic voters by a margin of better than 2-1, a deficit large enough to cost him the presidency as it did John McCain four years ago.

Some of his problem comes with the Republican brand, some through his own tough talk on illegal immigration during the Republican primaries. Either way, Romney has to find a way to close the gap or lose. Among the options: a conservative version of immigration reform, an Hispanic running mate, and plenty of grassroots courting.

That’s because the country’s demographics are changing. Republicans tend to win the majority of whites, but whites are shrinking as a percentage of the country while Hispanics surge.

Ayres noted that McCain in 2008 won the same percentage of the white vote as Ronald Reagan did in 1980. But whites represented 88 percent of the vote in 1980; the representation was 74 percent in 2008. Reagan won handily. McCain lost.

At the same time, Hispanics surpassed African Americans as the country’s largest minority, and their share of the vote grew, too.

Republicans fared well with George W. Bush, who spoke Spanish and backed immigration reform that would allow a path to citizenship for illegal immigrants already in the country.

Then Republicans helped kill immigration reform. Amnesty, they called it. They cheered as Arizona adopted a get-tough law. By last December, 67 percent of Hispanics called themselves Democrats and 20 percent called themselves Republican, a 47-point deficit.

By last week, he trailed Obama among Hispanic voters 67-27 in a new Pew Research Center survey. That’s worse for Romney than the 67-31 margin Obama took in 2008 against McCain.

Romney appealed to Hispanics during a visit to Arizona Friday, hoping their concern about the economy will trump other issues.

There are other possible routes, many of them applauded by Republican officials meeting in Arizona who signaled the party grew too harsh in its approach in recent years.

Some mentioned the appeal of Romney naming a running mate such as Sen. Marco Rubio, R-Fla., a Cuban American, or Gov. Susana Martinez of New Mexico, a Mexican American.

Several said they’d support a plan by Rubio to propose a conservative version of the DREAM Act that would allow children of illegal immigrants to stay in the United States, albeit without a path to citizenship.

“We need to make it comfortable to be in the country. Not citizenship, but if they’ve been productive members of society, they should stay,” said Glen McCall, a representative to the Republican National Committee from South Carolina.

He added that he now thinks he was too tough in opposing Bush’s proposed immigration overhaul. “I jumped the gun on calling it amnesty,” he said.

“Most Republicans, most people, don’t care for a fast track to citizenship,” said Bill Crocker, on the Republican National Committee from Texas, “but don’t mind if people live here peacefully and productively.”

Perhaps, but Romney ridiculed a proposal by primary rival Newt Gingrich to allow illegal immigrants in the country a long time to remain here legally, though without citizenship.

And any move to soften his positions will be lampooned by Democrats, eager to portray him either as harsh or as an unprincipled flip flopper who will, in the words of a Romney campaign adviser, rewrite his campaign as easily as the screen of an Etch A Sketch.

“The Latino community and voters nationwide will not allow Mitt Romney to Etch A Sketch Romney’s extreme views,” said Juan Sepulveda, a senior adviser for Hispanic affairs at the Democratic National Committee.

“If there is one thing that we are clear on, it’s that Mitt Romney is on the wrong side of every Latino issue and that, on immigration, he would be the most extreme presidential candidate in modern history.”