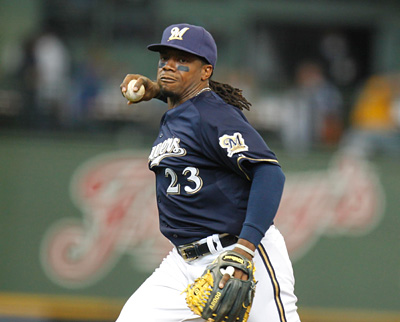 MILWAUKEE — The situation was perfect, the table set for a dramatic rally.

With nobody out, the tying runner on first base and the go-ahead run at the plate in the form of Ryan Braun in the bottom of the eighth inning, the Milwaukee Brewers appeared poised to shake the offensive fog that’s enveloped them for much of the last week.

Instead, 11 pitches later, it was over. Matt Belisle got Braun to pop out, Aramis Ramirez to line out and struck out Corey Hart looking.

The threat, and, for all intents and purposes, the game, were over.

The Colorado Rockies added another run in the ninth inning and skated out of Miller Park with a 4-1 victory in their pockets. On the other side, the Brewers were left to ponder yet another anemic offensive showing from a lineup that continues to struggle from top to bottom.

“We had the opportunities, and we had the guys coming up in our lineup that we count on to drive in runs,” said Brewers manager Ron Roenicke. “It’s always tough when you don’t have many opportunities through the game, and you get that one shot at it and you feel like everything’s on the line in one inning. Unfortunately, it should be a lot of different innings.

“It’s tough. But they’ve got some good relievers. They come in and they throw some tough pitches. We chased some balls against them. But that’s why they’re good.”

Milwaukee had its difficulties with Rockies starter Jeremy Guthrie as well. The right-hander handcuffed them over seven innings, allowing three hits and three walks as well as the Brewers’ lone run in the fourth when Mat Gamel singled home Braun to make it 1-1.

Guthrie’s counterpart, Yovani Gallardo, was just as good on a 106-pitch day. After allowing a run on three hits in the first inning, he settled in and allowed just three more hits and a walk the rest of the way to go along with a season-high eight strikeouts.

Gallardo left after the seventh with Francisco Rodriguez taking over. Almost immediately, the Brewers’ setup man got into trouble.

It started with a one-out infield single by Troy Tulowitzki. Aramis Ramirez made a nice play and pivot, but the throw was a tick late and Tulowitzki was aboard. Rodriguez compounded the problem by walking Jason Giambi on five pitches, bringing up Michael Cuddyer.

The Rockies’ rightfielder, who beat the Brewers with a pinch-hit single in the ninth off John Axford on Friday, needed just one pitch from “K-Rod” to do similar damage. This time he laced a double into the gap in left-center, scoring Tulowitzki easily and then the lumbering Giambi without so much as a slide to make it 3-1, Colorado.

“Great ballplayer,” Roenicke said. “Saw him in Minnesota a lot of years. Offensively, this guy’s getting better every time I see him. I don’t see a lot of holes anymore. He’s a professional hitter.”

Rodriguez got out of the eighth with no more damage.

Manager Jim Tracy handed the ball to lefty reliever Rex Brothers for the bottom of the eighth, but he walked Rickie Weeks and gave up a single to pinch-hitter Carlos Gomez, giving Milwaukee a pair of runners on with nobody out.

Just as quickly, Tracy made the call to the bullpen for Belisle, who entered having held right-handed hitters to just .078 on the season (1 for 13).

Braun, who was recognized in a pre-game ceremony for winning the National League MVP, popped out. One pitch later Ramirez lined out to right, with Weeks very nearly getting doubled off second by Cuddyer.

Belisle then got Hart looking with a 91-mph fastball, pretty much encapsulating the day for Milwaukee’s hitters.

The Brewers were 1 for 8 with runners in scoring position, and their team batting average stands at .224 heading into a three-game series with the Houston Astros.

Are things getting bad enough that lineup changes will have to be considered?

“We have to ride it out,” said Roenicke, quieting that discussion quickly. “We went through it last year, and we’ll do it again the same way. If there was a better way to do it, I would do it. I’ve seen different managers, different coaches go at it differently over a lot of years, and it doesn’t seem to go well when the coaches start losing their temper a little bit and panic — whatever you want to call it.”

Weeks, who at .197 is one of three regulars hitting under .200, isn’t exactly pushing the panic button.

“It’s baseball. Sometimes it doesn’t fall your way,” he said. “You’ve just got to keep swinging it.”