Twins have no answer for Yankees’ Granderson in loss 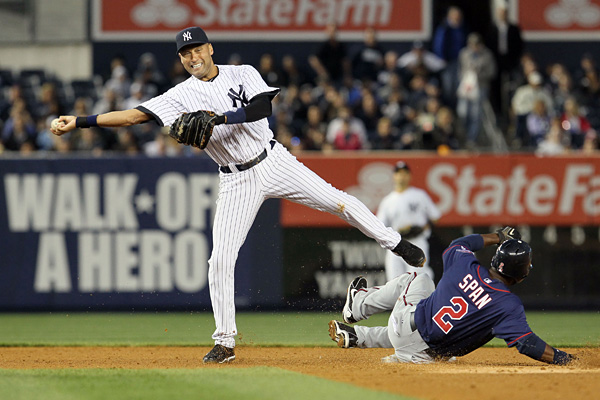 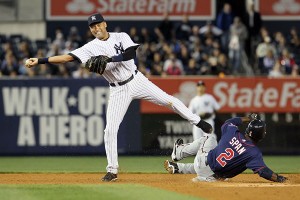 All at the expense of a Minnesota Twins pitching staff that is trying to find its footing at the beginning of the season.

Curtis Granderson had every camera and smartphone trained on him when he came to the plate. He’d homered off Anthony Swarzak in the first inning, again off Swarzak in the second and then off Jeff Gray in the fourth. He had 13 total bases before the game was half over. But if he could belt one more home run, he would become the 16th player in baseball history to hit four home runs in one game.

(PHOTO: Shortstop Derek Jeter of the New York Yankees gets a second-inning force out against Denard Span, right, of the Minnesota Twins at Yankee Stadium on Thursday, April 19 2012, in New York.)

He disappointed in his first try, mustering a single to right that moved Eduardo Nunez to third.

He came to the plate in the ninth against Glen Perkins and reached on an infield single. That’s 14 total bases in one night. Not too shabby.

So Granderson was stopped at three homers, but the Yankees needed all of them as they beat the Twins 7-6 and were able to salvage a split of the four-game series.

Granderson, who has 13 career multihomer games, became the 24th opponent to hit three home runs in a game against the Twins, the first since Jose Bautista of the Blue Jays did it last season.

The Twins have done it four times.

Granderson also became the 12th major leaguer to hit three home runs in the first four innings of a game, according to STATS LLC and the SABR Home Run Log. Lou Gehrig is the only Yankees player to hit four homers in a game, which matches the major league record.

Ryan Doumit had a homer and four RBI for the Twins, who leave town after winning two games in a series here for the first time since May 2001.

And, for the second consecutive night, the Yankees scored three in the bottom of the first. Granderson homered and Mark Teixeira added a two-run homer. The difference in the two nights was that Anthony Swarzak was on the mound, not veteran Jason Marquis. Swarzak didn’t have the experience, and the Yankees were making louder contact.

The Yankees scored three more in the second, on a RBI single by Derek Jeter followed by a two-run homer by Granderson. Swarzak was leaving pitches over the middle of the plate that were getting crushed. But the Twins needed him to try to go deeper in the game, so Swarzak was back on the mound for the third inning. He got two outs but was pulled after giving up a single to Raul Ibanez and walk to Russell Martin.

With righthander Nick Blackburn set to return to the rotation Tuesday, Swarzak is probably headed back to the bullpen.