Romney: Obama failed to live up to own words 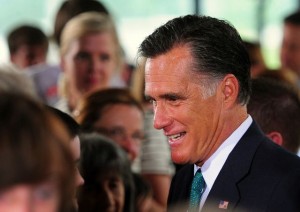 CHARLOTTE, N.C. — In what sounded like a preview of his own acceptance speech, Republican Mitt Romney came to Charlotte on Wednesday to make his case against President Barack Obama as a failed leader whose policies have made the economy worse.

“He’s over his head, swimming in the wrong direction,” the presumptive GOP presidential nominee told about 270 supporters, with a giant American flag and Charlotte’s skyline behind him.

Looking tanned and ready for the general election battle, the former Massachusetts governor spoke briefly but bitingly in a rooftop venue only a block away from Bank of America Stadium. That’s where Obama will cap off September’s Democratic National Convention with an acceptance speech to 74,000 people – not counting the millions watching at home.

“The president is going to do everything he can to get North Carolina in his column,” said Romney, who then added this applause line: “That’s not going to be enough because we’re going to win North Carolina.”

Wednesday’s trip, which also included fundraisers in Raleigh and Charlotte, was one of Romney’s first forays into this crucial swing state and was billed as a “prebuttal” to Obama’s acceptance speech in Charlotte.

Obama, who in 2008 became the first Democrat to carry North Carolina since 1976, is trying hard for a repeat. Besides choosing Charlotte to host the party’s convention, he has been a frequent visitor to the state — an “official event” in Raleigh next Tuesday will be his fifth time in the state in the last half year.

His campaign never left after 2008, and by week’s end will have 15 field offices in the state, including two in Charlotte.

But Romney tried, during his 15-minute afternoon speech, to convict Obama with his own words, delivered the last time the president gave an acceptance speech, during the 2008 Democratic convention in Denver.

In that speech, for example, Obama said that “we measure progress by how many people can find a job that pays the mortgage.”

On a host of economic indicators — jobs, start-up businesses, the federal deficit, medium income, foreclosures — Romney charged that Obama had failed to deliver on his promise to rescue the sour economy he inherited.

He also blamed Obama for the loss of about 50,000 jobs in the Tar Heel state since he took office.

“You won’t hear that at his convention,” Romney told his audience. “But you’re going to hear it at ours, I’ll tell you that.”

Romney even made sport of Obama’s use of Greek-like columns on the stage where he delivered his 2008 acceptance speech.

“You’re not going to see President Obama standing beside Greek columns (in Charlotte),” Romney said. “He’s not going to want to remind anybody of Greece because he’s put us on a path to be more like Greece” — a country that had to be bailed out by the European Union because of its unmanageable debt.

But Romney said little about what he would do as president to fix the economy. Instead he promoted his resume as a former CEO and a budget-cutting governor.

“We need someone who’s actually … spent time in the private sector,” he said. “I want to bring some of those skills to Washington.”