This news story was published on April 19, 2012.
Advertise on NIT • Subscribe to NIT 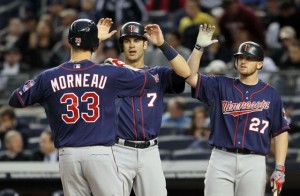 NEW YORK — Reese Marquis was at Yankee Stadium on Tuesday, one day before her father made his Minnesota Twins debut. She was smiling and laughing, a sign that things were getting back to normal at the Marquis household.

Jason Marquis’ Twins debut was delayed because he spent two weeks of spring training with his four-year old daughter as she recovered from injuries suffered in a serious bicycle accident. She’s now out of the hospital, back to doing things little girls do.

And her father on Wednesday was able to show his team what he can do in a 6-5 Twins victory.

And that was shake off early struggles to protect a lead through five innings. He showed his team that he can make adjustments and cobble together innings in baseball’s most hostile environment.

His start got the Twins on their way past the Yankees. Derek Jeter hit a solo home run in the ninth off closer Matt Capps but Capps came back to strike out Curtis Granderson and get Mark Teixeira to fly out to end the game.

The Twins have now won two games in a series in New York for the first time since 2001. And they have a chance to win the four-game series when it wraps up Thursday night.

It was icing on the cake for Marquis in his first start as a Twin.

Marquis almost handed back a 4-0 first-inning lead but grinded through five innings and left a 6-4 lead in the hands of the Twins bullpen. In five innings, Marquis gave up four runs on seven hits and two walks with three strikeouts. Four of those hits and both walks came in the first inning when the Yankees scored three runs. He needed a double play with the bases loaded to get out of the inning.

He found a little groove after that, with a solo home run by Robinson Cano in the third the only other run off him. It was his first start since Aug. 14 of last season, when he was hit by a line drive and suffered a broken leg while pitching for Arizona.

The Twins hammered away at Yankees righthander Hiroki Kuroda. Justin Morneau led the charge, going 3-for-3 off Kuroda with two home runs and three RBI. Morneau now has seven home runs in 12 games at the new Yankee Stadium.

In 80 games at Target Field, Morneau has five home runs.

Morneau’s second homer of the game came in the fifth, off Kuroda’s 81st and final pitch of the game. It gave the Twins a 6-4 lead.

Brian Duensing replaced Marquis and gave up three hits — but no runs — in 1 2/3 innings. But he left runners on first and third with two outs for Jared Burton, who got a big strikeout of Nick Swisher to end the seventh. Burton went on to pitch a 1-2-3 eighth.

Marquis, 8-6 with a 4.43 ERA between Washington and Arizona last season, was appreciative of the Twins’ willingness to let him pitch at Class AA New Britain, so he could visit his daughter as she recovered.

“The Twins have been nothing but gracious,” Marquis said.

When Marquis rejoined the Twins late in spring training, he talked about going through things no parent ever wants to go through as Reese fought to recover. Over the last week, with his daughter back home and acting like her old self, the family has gotten back into a routine. Marquis said it’s been easier for him to prepare to pitch for his new team.

“She’s at home safe and sound now,” Marquis said. “She’s getting better. Getting back to her old ways. Now we just have to slow her down. She’s trying to do too much. But as for myself, I was able to accomplish what I wanted in New Britain and now I’m ready to go.”