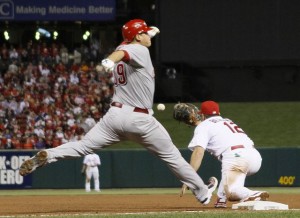 ST. LOUIS — The difference between St. Louis Cardinals lefthander Jaime Garcia and Cincinnati righthander Mat Latos on Wednesday night was as it always has been for the two at Busch Stadium.

(PHOTO: The Cincinnati Reds’ Devin Mesoraco reaches safely ahead of the throw to St. Louis Cardinals first baseman Lance Berkman (12) on an RBI single in the fifth inning on Wednesday, April 18, 2012, at Busch Stadium in St. Louis, Missouri. The Cardinals eased to an 11-1 triumph.)

After the Cardinals’ 11-1 victory, clinching their fifth straight series triumph (if you count the one-gamer at Miami), Garcia is 17-9 for his career at Busch with a 2.33 ERA. In three starts at Busch, Latos’ ERA is more than 16 runs a game higher at 18.81.

Small sample, mind you, but in his appearances at Busch in his career for San Diego and Cincinnati, Latos has permitted 27 hits and 23 runs in 11 innings and the Cardinals are hitting .464 against him here, including a 10-hit, eight-run output against him Wednesday.

Carlos Beltran, with a two-run poke in the second, now has three homers in four at-bats against Latos, and he wasn’t even with the Cardinals until this year.

Garcia, who tripled in two runs in the sixth, gained his seventh win in eight lifetime decisions against the Reds. Throwing four double-play balls in his seven innings, Garcia (2-0) also helped erase the bad taste from his start of last week when he was staked to an early 3-0 lead at Cincinnati but lost it in what turned out to be a defeat for the Cardinals and a no-decision for Garcia.

As the Cardinals won their second straight in this series, which will conclude Thursday afternoon, they will be playing that finale and probably a succession of games without first baseman Lance Berkman, who suffered a recurrence of the left calf strain he sustained last week in Cincinnati. Berkman, who came out in the fifth, just had returned to the lineup Tuesday after missing four games and he said, “The (disabled list) is a possibility, for sure.”

Every infielder but the first baseman started a double play for Garcia. “Four double plays is a good sign,” Garcia said. “When I get somebody on base, that’s what I want to do.

“I want to pitch down in the strike zone and trust my sinker and I was able to do a good job of that tonight. I’ve been working in the bullpen, trying to get my movement back.”

On the other hand, Latos did little to help himself from the beginning.

Leadoff man Rafael Furcal, who had four hits, drilled a double past Joey Votto at first, and Beltran then walked.

Furcal went to third on Matt Holliday’s fly to right, and Berkman hit a dribbler to the right side. Votto, moving to his right, couldn’t get to the ball. It was fielded by second Brandon Phillips, who chose to underhand a toss to Latos at first.

Berkman somehow got to the bag just ahead of Latos, who had trouble making contact with the base after gloving Phillips’ soft throw.

While Latos may have been trying to process this play, he paid no attention to Beltran or Berkman, who executed a double steal with no possible resistance by catcher Devin Mesoraco. The Cardinals would steal four bases for the night, including Tyler Greene’s 17th without being thrown out in his major league career.

David Freese seized the moment in the first inning and sailed a two-run double past Scott Rolen at third.

Then Latos had to face Beltran again in the second inning. In his first two official at-bats against Latos in his career, Beltran had hit two homers.

With Greene at third and two out, Beltran homered again for his club-leading fifth of the season, and it was 5-0.

“I guess he’s one of those pitchers where you step to the plate he’s going to throw you a pitch right there to hit,” said Beltran. “I was lucky enough to connect and hit it out of the ballpark. I don’t know what to say.”

Latos did get Beltran out for the first time in the fifth on a groundout. “We’re even,” said Beltran, with a smile, knowing that that really wasn’t the case.

Latos, who held the Cardinals to one run in eight innings in San Diego last year, was gone from this game in the sixth when Garcia, after fouling off six pitches, drilled a triple over the head of center fielder Drew Stubbs, scoring Freese and Jon Jay.

“That was exciting,” Garcia said. “I got that pretty good.”

The three-bagger was the first of his career for Garcia, who has only two other extra-base hits, a double and a homer, in 123 big-league at-bats.

“Sometimes you have a good day. Sometimes, you have a bad day,” reasoned Furcal. “Today was one of the good ones.

“I feel good at the plate. In the last three games, I was trying to do a little too much, jumping a little bit. I concentrated on hitting the ball the other way in BP.”

The win was the fourth in five games for the Cardinals against the Reds, who have led for only one inning out of 46, when they pushed across the winning run in a game last Thursday. The Cardinals, by contrast, have led for 35 innings.