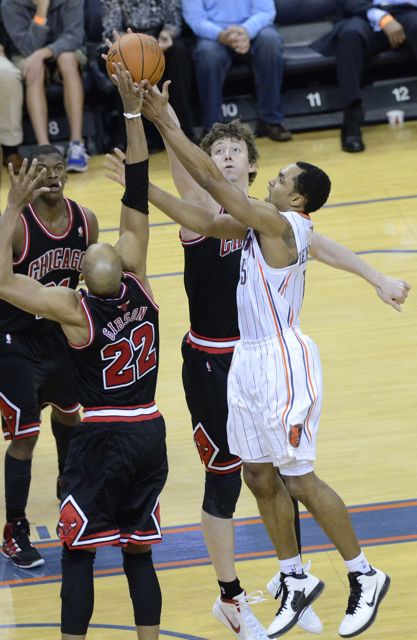 CHARLOTTE, N.C. — In a season with the Charlotte Bobcats lost a lot and by a lot, this was another classic: The Chicago Bulls beat them, 100-68, at Time Warner Cable Arena.

The Eastern Conference-leading Bulls (47-15) got 22 points from Richard Hamilton. Rookie Kemba Walker scored 16 for the Bobcats.

(PHOTO: The Chicago Bulls’ Taj Gibson (22) and Omer Asik team up to block the shot of the Charlotte Bobcats’ Gerald Henderson at Time Warner Arena in Charlotte, North Carolina, on Wednesday, April 18, 2012. The Bulls topped the Bobcats, 100-68.)

This was the Bobcats’ 18th consecutive loss, extending a franchise-record. At 7-54, they must win one of their remaining five games to avoid the worst winning percentage in NBA history. Three of those games are at Time Warner Cable Arena and two others are in Washington and Orlando, Fla.

The Bobcats have already clinched the NBA’s worst record this season. That guarantees them a top-four pick in the June 28 draft and the best odds (25 percent) of getting the top pick in the May 30 lottery.

The Bulls executed well despite being without All-Stars Derrick Rose (sore right foot) and Luol Deng (bruised ribs). Of course, that was consistent with the Bobcats’ last two losses, to the Boston Celtics and New Orleans Hornets. The Celtics were missing their big three of Kevin Garnett, Paul Pierce and Ray Allen. The Hornets played without Eric Gordon, Chris Kaman and Emeka Okafor.

The Bobcats played without D.J. Augustin, still down with tendinitis in his right knee. Coach Paul Silas hopes Augustin will be available Friday for a home game against the Memphis Grizzlies. Rookie Kemba Walker started at point guard in Augustin’s absence.

The Bulls started fast, taking a 34-20 lead into the second quarter by making 15 of their first 21 shots. The Bobcats had a particularly hard time containing Chicago power forward Carlos Boozer, a former Duke star. Boozer had six points, three rebounds and two assists by the end of the first quarter.

By halftime, with the Bobcats behind 52-37, shooting guard Gerald Henderson had made three of his four shots for six points. No other Bobcat was shooting 50 percent or better, although Walker had 14 first-half points, thanks to making seven of eight free-throw attempts.

The Bobcats have two more games left in this five-game home stand, against Memphis Friday and the Sacramento Kings on Sunday.