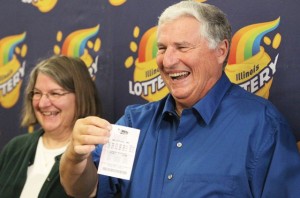 The day after the 65-year-old discovered he held a winning ticket to the largest lottery jackpot in history, news had already broken that the ticket had been sold at the local Moto Mart. As the town buzzed with rumors, Butler took his ticket to the First Bank in Red Bud.

(PHOTO: Merle Butler, right, standing next to his wife Patricia Butler, holds up the winning Lottery ticket, Wednesday, April 18, 2012. The Red Bud, Illinois couple plans to remain in the town of 3,700 residents.)

“One of the people I know in the bank, as I was walking in the door to put this in the lock box, says, ‘Oh, I guess you come over to put your ticket away,’ ” Butler said.

He responded in a joking voice: “Yeah, I won this thing and I gotta get this thing put away.

“She doesn’t know until right now that I really had that ticket in there,” Butler said Wednesday, as he and his wife stepped forward to claim their winnings.

News that a winning ticket had been sold in town quickly had the community of about 3,700 residents spinning theories as to who won. First one name would be on the tongues of everyone in town. And then another. The speculation went on since the March 30 drawing, as reporters knocked on door after door chasing the rumored winner.

As locals questioned one another, Butler, a retired computer analyst and longtime Red Bud resident, said he didn’t deny being the winner. “I’ve answered most of them truthfully that, yes, I did, but they didn’t catch it,” Butler said.

On Wednesday, the suspense ended when Butler and his wife, Patricia, arrived at City Hall under police protection for a press conference before national media.

Amid the buzz in Red Bud about who held the winning ticket, Butler’s name was not among those often mentioned. “I didn’t know it was the Butlers until about 10 minutes before the press conference,” said Red Bud Mayor Tim Lowry. “That was a well kept-secret.”

The Butlers took limited questions from the news media, and left City Hall with a police escort. A large group of residents gathered outside City Hall cheered for their newly wealthy neighbors.

The couple held one of three winning tickets for the $656 million jackpot, claiming a $218.6 million stake. After taxes, they will get a lump sum payout of almost $111 million.

On the City Hall lawn, the Illinois Lottery gave away hot dogs and cookies and drinks. A DJ played country and rock anthems, which appropriately included John Mellencamp’s “Small Town.”

The Butlers said they only told a few people, mostly relatives. They spent the weeks since the lottery drawing talking to financial planners and hiring a lawyer.

“I figured the quieter I keep it, the better we are,” Merle Butler said.

Merle Butler worked at General American Life Insurance in St. Louis for 25 years before retiring about eight years ago. His wife, who worked in the IT department at Edward Jones, retired about three years later. They have been married for 41 years.

Butler said he occasionally buys lottery tickets when the jackpot reaches the $100 million level. He bought three chances for $3 on the Wednesday before the drawing. “I wasted two dollars,” he joked.

The night of the drawing he watched the evening news, wrote down the winning numbers, and later checked his ticket.

“The further I went, the more they matched,” he said. “After I looked at it for a couple minutes, I turned to my wife, who was right there with me, and I said, ‘We won.’ She kind of looked at me funny, and I said, ‘No, we won.’ ”

His wife, he said, “giggled for about four hours, I think.”