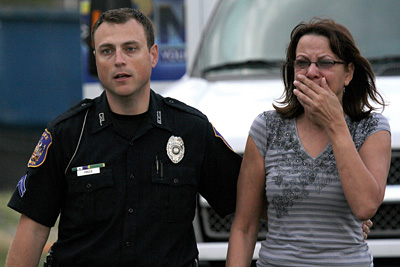 HAMPTON, Va. — Four people are dead after a domestic complaint that led to an early-Wednesday confrontation between Hampton police and an armed man atop a burning home. A fatally injured woman had been found outside the home, and two bodies were discovered inside.

Police were called to the home shortly before 4 a.m. because of a domestic complaint, said Cpl. Jason Price, spokesman for the Hampton Police Department. Upon their arrival, officers found a woman in the road who had been shot, stabbed and burned.

The home was on fire, Price said.

(PHOTO: Cpl. Jason Price, left, escorts a close family friend of the fatalities to the scene of a Hampton, Virginia home, Wednesday, April 18, 2012, where four people are dead after a domestic complaint that led to an early-Wednesday confrontation between Hampton police and an armed man atop a burning home.)

He said the woman told officers that there were people inside the home. As officers approached the home, they encountered a man on top of the roof of the porch with a handgun, Price said. He said police exchanged gunfire with the man.

No officers were injured in the shooting, but the man has died, Price said. The man’s cause of death has not been determined.

The extent of wounds and a cause of death has not been determined for the woman and child, Price said.

The woman who was found in the road was taken to a local hospital. She has been pronounced dead, Price said.

Calvin Silver, a neighbor, said he worked with the woman who had been found in the street. He said they worked together in the English as a Second Language department of Newport News Public Schools.

Silver said a man had once lived at the home, but he didn’t know the status of the relationship.

Police have not identified any of the victims, pending notification of family members.