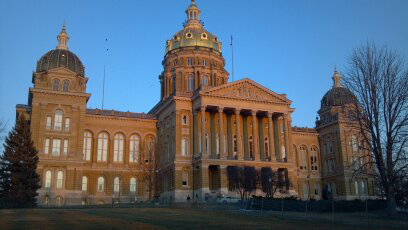 Negotiators for the Iowa House, Senate and governor are continuing efforts to narrow their differences on an overall budget number that could pave the way for adjournment later this week.

He held out hope for an agreement that would set the stage for House-Senate conference committees to work out differences over spending in various budget categories beginning as soon as April 17 – the Legislature’s scheduled adjournment date.

House Republicans and Senate Democrats have been trying to narrow a $200 million to $300 million difference on a budget of more than $6 billion in state general funds for government agencies and programs for the 2013 fiscal year that begins July 1.

Among the major differences have been higher education spending, where Senate Democrats want to spend about $61 million more than the House GOP, $55 million the House budgeted to fully fund property tax credits and an even larger difference over commercial property tax relief.

House Speaker Kraig Paulsen, R-Hiawatha, expressed optimism that an agreement will be reached, but said House Republicans will insist on balancing expenditures with revenues and not going using one-timer money for on-going expenditures.

A spokesman for GOP Gov. Terry Branstad indicated the governor is pleased with the progress being made.

“I think the fact that (the House) came up significantly is certainly a positive, but they’ve been saying since the beginning of the session don’t pay any attention to our budget, it’s not real,” Gronstal said.

He said Senate budget subcommittee chairs are reviewing the most recent budget numbers.

An agreement on an overall budget number would be a big step toward ending the 2012 session.

“We’ve got a shot at getting out of here Saturday,” Paulsen said. “I don’t see the logistics of how we get out Friday.”

However, he added, “That assumers those big pieces fall into place.”