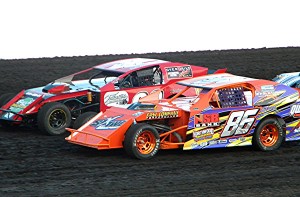 MASON CITY – Despite the weather forecast of tornadoes and thunderstorms, the races went on as scheduled, but was not able to be completed.

The hotlaps were fast and hard racing. The racers got down to business and just went lap after lap of non-stop fury to get to the end. Whether or not it was because of the weather is not known, but the like they started and then were finishing.

In the Hobby Stock Class, it wasn’t hard to figure out who would be the winner early on. As long as he stayed in the race, Stac Schroeder was going to win. And he did.

The Sports Mod Class Winner was Dan Tenold, from Northwood. He would be the last winner of the night, with only a couple of laps to go, rain made the Stock Car Class come to a halt. With Larry Portis in the lead and drivers like Joe Willier and Derek Green on his tail, the battle for the win had to stop.

9 Responses to Rain Cuts Race at I-35 Speedway Short