Dire warnings may have saved lives 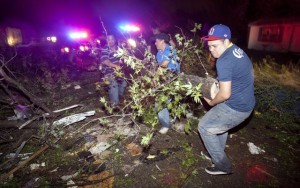 (PHOTO: Residents of a south Wichita, Kansas neighborhood clean up fallen trees after a tornado caused massive destruction on Saturday night on April 14, 2012.)

The severe weekend conditions allowed the weather service to test an experimental system of alerting Kansans and Missourians to the potential impact of storms. Beginning this month and continuing through October, an effort called “Impact Based Warning” aims to more clearly describe the risks faced by people in the path of violent weather.

Officials on Sunday, though not ready to credit the absence of fatalities in Kansas to the enhanced warning system, said the state was lucky to have escaped a high human toll.

“Given the scope of the severe weather and that it was a Saturday evening, with people out and about, it’s amazing there weren’t any fatalities or serious injuries that we’re aware of,” said Kleinsasser.

Kansas Gov. Sam Brownback — who on Sunday declared a disaster emergency and toured damaged areas in south Wichita — said residents responded to the storm warnings and took cover, which may have saved many lives.

The warnings of the weather service were sharpened to include, for the first time, detailed descriptions of what type of damage was possible. Each text alert carried a tagline ranging in severity from “radar indicated” to “observed” to “significant,” the latter indicating a strong, confirmed tornado capable of causing major destruction.

News media and emergency managers across eastern Kansas and Missouri are participating in the experiment, which follows a year in which the United States witnessed a historic number of tornado fatalities. In Joplin, where an EF-5 twister on May 22 resulted in 161 deaths, many people were slow to take shelter until the tornado began ripping through town.

Weather service offices serving Kansas City, Springfield, St. Louis, Wichita and Topeka are testing the enhanced communication system. In rare cases of imminent danger on population centers, such as the Joplin tornado, warnings will carry the tagline “catastrophic,” but over the weekend, Kansas storm monitors resisted using that designation.

“We’re trying to separate the normal kinds of warnings from the this-can-kill-you warning,” Kleinsasser said.

Meteorologist Kyle Poage, of the weather service in Topeka, said lives in Kansas may have been saved by a drumbeat of dire warnings late last week from the Storm Prediction Center. Part of the National Weather Service, the center identified parts of central Kansas, Oklahoma and eastern Nebraska as being in the middle of a “high-end, life-threatening” zone of likely tornado activity.