Attacks in Afghanistan end after 18 hours of intense battle 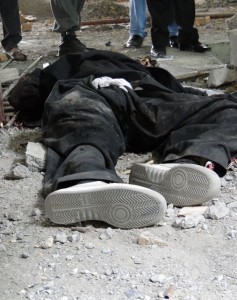 (PHOTO: Afghan police stand over the body of an insurgent killed in an Afghan security force assault after a more than 18-hour siege of a semi-completed building in Kabul’s diplomatic enclave, April 16, 2012. Five insurgents fired from the building on embassies, government offices and the U.S.-ed NATO force headquarters.)

The attacks, marked by extensive gunfire, explosions and rocket attacks and among the most serious to hit the capital since the Taliban was driven from power in 2001, saw eight Afghan security personnel and three civilians killed, Interior Minister Besmillah Mohammadi said Monday.

Afghan officials also added that at least 36 insurgents were killed and more than a dozen wounded or captured.

Soon after daybreak Monday, security forces managed to flush out insurgents holed up near embassies in Kabul’s heavily guarded Akbar Khan diplomatic neighborhood. The Taliban has taken credit for the protracted assault and says it is part of a “spring offensive.”

Fighting continued for a few more hours around the parliament, among the last areas to be fully controlled. Video footage showed soldiers scaling scaffolding, outflanking militants who appeared to have ensconced themselves near the top of a construction site in Kabul.

The attacks hit a month before a NATO summit at which the United States and its allies are supposed to further refine plans for the 2014 withdrawal of many of the 130,000 foreign troops now stationed in the country and the transfer of security to Afghan forces.

Three of the attacks in Kabul were mounted from high-rise construction sites, affording fighters a superior vantage point and cover behind green protective netting. This suggests that Afghan security forces didn’t take sufficient notice of a similar operation in Kabul last September that saw unoccupied buildings used for rocket attacks on the U.S. Embassy and NATO headquarters.

The tactic underscored the insurgents’ flexibility, some experts said.

“The Taliban is constantly developing new methods of attack,” said Rohan Gunaratna, head of the International Center for Political Violence and Terrorism Research at Singapore’s Nanyang Technological University. “If they succeed, they may continue to use them, otherwise they move on.”