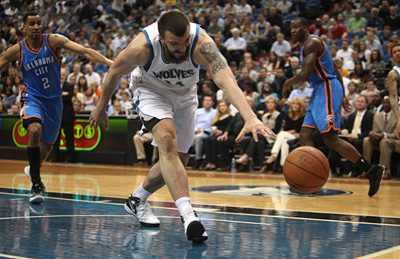 (PHOTO: The Minnesota Timberwolves’ Nikola Pekovic loses the ball out of bounds during the first half against the Oklahoma City Thunder at the Target Center in Minneapolis, Minnesota, Saturday, April 14, 2012.)

“One more stop, one more rebound, couple more made field goals, couple less missed free throws,” he said, “and we definitely could have stole that one.”

He forgot one thing:

While teammate Kevin Love stayed home and Ricky Rubio watched the game from the team’s locker room, a Wolves team missing three important players (don’t forget Luke Ridnour, too) once again pushed the best team in the West to the limit and once again could find no answers for either Kevin Durant or Russell Westbrook.

This time, Durant scored 20 of his game-high 43 in the fourth quarter alone on a night when he once again seemingly made any shot any time he really wanted.

The Wolves tried defending Westbrook with everybody from 6-7 Wes Johnson to 6-11 Anthony Randolph and none of it could prevent the Thunder from sweeping the three-game season series by a combined total of 18 points.

They pushed the Thunder to the final seconds, pulling within two points with 5:40 left and then again with 15.6 seconds remaining before the Wolves were forced to foul and Westbrook made three of four final free throws to secure the victory. Beasley scored 26 off the bench, Barea scored 24 and Randolph scored 22.

“That’s a great team with two great players, and we competed the whole time,” Wolves coach Rick Adelman said. “That’s how we’ve got to play the rest of the way.”

The Wolves played their second consecutive game without Love, who did not come to Target Center on Saturday night because he still is experiencing symptoms from the concussion and strained neck he sustained Wednesday in Denver. He’ll stay home until he feels better.

With the nature of such a head injury and now just five games left in a season that has lost all meaning … what’s the chance that Love has played his final game this year? He still must pass a series of NBA-mandated tests that prove he is symptom-free.

“I have no idea, I just don’t know,” Adelman said.  “I don’t know how they’re going to base their decision. We’d like to see him come back for whatever he can play. But the doctors, the trainers and Kevin himself will be the ones who make that decision.”

— Ridnour missed his sixth consecutive game because of that ankle he sprained April 2 at Sacramento. “He keeps telling me he’s going to play, he does not want to sit out the rest of the season,” said Adelman, who sounds a bit skeptical because Ridnour still is having problems cutting and shooting off that foot. “Knowing him, he’ll do that.”

— Barea didn’t duplicate that 25-point, 14-assist, 10-rebound triple-double he had last time out against the Thunder. This time, he managed just 24 points and 10 assists (nine in the second half). “Well, that’s what we expect,” Adelman said dryly. “He set the bar. I didn’t set the bar.”

— Thunder Sixth Man of the Year candidate James Harden returned to action after missing Friday’s victory over Sacramento because of a sore knee.