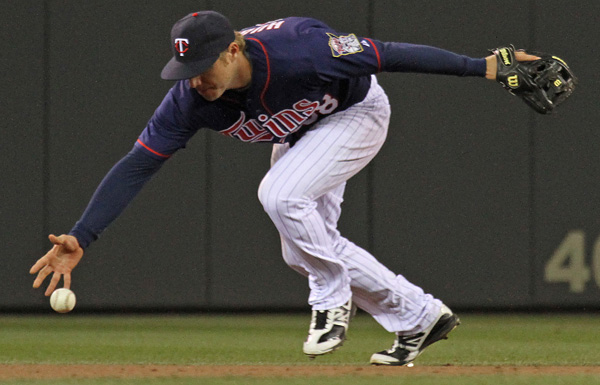 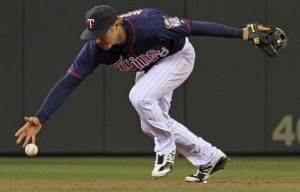 MINNEAPOLIS — The disappointment of losing back-to-back World Series has been compounded for Rangers fans the past two winters. Besides coming so close to the ultimate goal, they also said goodbye to a star lefthanded pitcher.

Cliff Lee re-signed with the Phillies after the 2009 season, and C.J. Wilson signed with the Angels after last year’s World Series heartbreak against the Cardinals.

But Texas already has another lefthanded star on the rise in Matt Harrison, who stymied the Twins for eight innings Friday night, leading the Rangers to a 4-1 win before an announced crowd of 31,400 on a chilly night at Target Field.

After scoring 16 runs in consecutive victories over the Angels, the Twins got shut down again, much as they did while scoring six runs combined in the season’s first four games.

“These guys have a great pitching staff,” Twins manager Ron Gardenhire said. “That’s why they’ve been in the World Series the last two years. So this is not going to be an easy offensive series. I like our offense, but (Friday) they got us.”

Harrison, who started Game 7 of the World Series in October, is 6-0 with a 2.01 ERA in his past seven regular-season starts. He scattered seven hits and two walks against the Twins, keeping them from scoring after Danny Valencia gave them a 1-0 lead with a second-inning sacrifice fly.

“I’ve faced him in the past, and I don’t remember him being as good as he was today,” said Twins center fielder Denard Span. “Whatever he’s done the last two starts is definitely working for him.”

How do the Rangers keep finding these lefthanders? Harrison, 26, came to Texas in a trade that keeps looking better and better. In 2007, they moved Mark Teixeira to Atlanta in a five-player deal that brought Harrison to the Rangers along with Elvis Andrus, pitcher Neftali Feliz and catcher Jarrod Saltalamacchia.

Andrus, a terrific defensive shortstop, had three hits off Twins starter Anthony Swarzak, including a leadoff single in the fourth inning. That started a three-run rally. Swarzak caught a tough break that inning, when Josh Hamilton lunged at a two-strike pitch and hit a bouncer back toward the mound.

It was a potential double-play ball, but Swarzak deflected it to a spot in the infield where it was impossible to get even one out.

“I take all responsibility on that one,” Swarzak said. “If I pull my glove back, I watch an easy double play get turned. It changes the whole game. I won’t sleep well tonight over that one.”

4-1 in the seventh with his fourth home run, matching the Twins’ Josh Willingham for the major league lead.

Swarzak, who has been filling in as a starter while Liam Hendriks recovers from food poisoning, gave the Twins seven solid innings. The offense just couldn’t reward him against Harrison.

In the ninth, Rangers manager Ron Washington gave former Twins closer Joe Nathan another day of rest, turning to Alexi Ogando for the save. The Twins quickly put two runners on base, but Ogando retired Valencia, Chris Parmelee and Sean Burroughs.

“Ogando’s another guy who throws the ball in the mid-90s with a nasty breaking ball, too,” Gardenhire said. “As expected, they come over here with a great pitching staff, and tonight was a tough night for us offensively.”