Dempster’s one mistake costs him 2-1 loss to Brewers 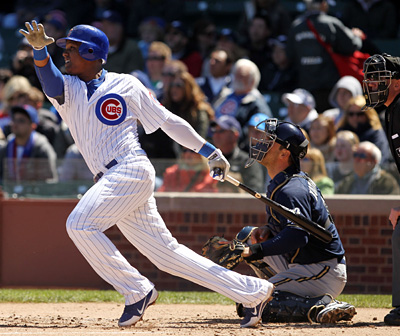 Expectations were lowered after Epstein and general manager Jed Hoyer reshaped the team in December and January to build a better future.

(PHOTO: The Chicago Cubs’ Starlin Castro hits a sacrifice fly to drive in a run against the Milwaukee Brewers in the first inning at Wrigley Field in Chicago, Illinois, on Wednesday, April 11, 2012. Milwaukee won, 2-1. )

Ryan Dempster threw another gem Wednesday in his second start of the season, but one bad pitch led to a 2-1 loss to the Brewers.

In an engaging duel with Yovani Gallardo, Dempster took a 1-0 lead into the seventh when George Kottaras’ two-run homer put the Brewers on top.

The Cubs failed in the clutch again, going 0-for-7 with runners in scoring position and striking out 12 times, including six over the final two innings against Francisco Rodriguez and John Axford.

The 1-5 start is their worst since 1997, when the Cubs set a National League record with an 0-14 mark. And it doesn’t get any easier Thursday when Zack Greinke faces Matt Garza in the final game of the homestand.

Dempster has a 1.88 ERA after allowing seven hits over 141/3 innings in his first two starts, but blamed only himself after taking the loss.

“I could have won that game it I had made a couple of better pitches in the seventh inning,” he said. “Games like those, you know that a mistake can end up costing you the game. … Unfortunately I left a cutter over the middle of the plate and it got hit out, and it was enough to win the game for them.”

The Cubs have led in five of their six games, and have blown leads in four of their losses. They spent six weeks emphasizing bunting in spring training, but haven’t laid one down when it matters after failing three times on Wednesday.

“You look back over the week, and we’ve had opportunities to win every ballgame,” second baseman Darwin Barney said. “That’s good, and we’re going to build on that and the wins will start coming.”

“Guys are battling and giving us a chance,” Cubs manager Dale Sveum said.

“Battling” is a relative term. The “grind it out” offensive philosophy Epstein espoused during his introductory news conference has been absent, with Cubs hitters swinging at first pitches constantly instead of waiting for their pitch.

“We’ve been in close ballgames so far most of the time, one hit or one pitch away,” catcher Geovany Soto said. “Really we’ve been playing solid baseball.”

Maybe so, but no matter how anyone spins it, the opening homestand has been an unmitigated flop.