Gingrich, campaigning in North Carolina, says he’s not going away 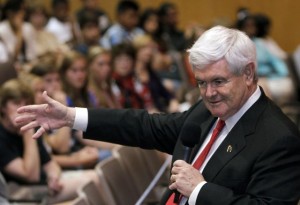 RALEIGH, N.C. — Former House Speaker Newt Gingrich’s campaign Monday began morphing into less of a pursuit of the presidency and more into an effort to shape the Republican platform and to influence the discussion in the fall elections.

Campaigning in Raleigh, Gingrich said he planned to battle front-runner Mitt Romney in North Carolina’s May 8 primary and all the way to the GOP convention in Tampa, Fla., but conceded the prospects of overtaking the former Massachusetts governor were not bright.

But he said Republicans still face serious choices at the convention and into the fall — whether the GOP will be a “conservative, dynamic movement” or whether it will move more to the center. Gingrich said he hoped his candidacy would help influence that debate.

Meeting earlier with a group put together by black conservatives, Gingrich elaborated on his theme, saying he wanted Republicans up and down the ticket this fall to run on a conservative platform, which he said was not only the principled choice but also the best way to win.

“That’s why I am continuing to campaign,” Gingrich said, “trying to send a signal.”

Romney has two fundraisers planned April 18, but Santorum has no appearances planned in the state with the primary just a month away. Santorum is focusing on the GOP primary in his home state of Pennsylvania on April 24.

That means that Gingrich has North Carolina nearly to himself, and he spent Monday campaigning in Raleigh, meeting with a community group, holding a news conference, having lunch at Caffe Luna and addressing students at Broughton High School. On Tuesday, he will campaign in New Bern and he will return to the state Saturday to attend a “tea party” rally in Greensboro.

While Gingrich is actively campaigning here, he is doing so without any advertising budget that would allow him to reach a broad number of voters.

The difficulty Gingrich faces was evident at a meeting with community leaders at the Shanahan Law Group, when one person asked Gingrich whether he thought conservatives might mount a primary challenge to a President Romney in 2016.

Earlier in the campaign, Gingrich might have used such a question to challenge Romney’s conservative bona fides. Instead, Gingrich talked about the need to make the GOP adopt a conservative platform in Tampa.

Gingrich said he hoped the new phase of his campaign would enable him to push some of his ideas — something he said he often found difficult to do during the hectic give and take earlier in the campaign.

He said the country needed bold ideas because economic conditions were much worse than people realize — that unemployment was far worse than the numbers indicate, college kids can’t find jobs, that the national debt was growing, and that many of the social programs such as Medicare and Social Security faced financial challenges.

“It is a very deep problem,” Gingrich said. “It is not a problem that is going to be fixed by marginal changes.”

Among the ideas, he said, is an American Energy Independence Plan to encourage domestic exploration for oil and gas, to use gas and oil royalties to pay off the national debt, and new efforts toward brain research to solve a host of brain-related diseases, from Alzheimer’s to autism.

“He is an engaging person,” said John Johnson, the owner/pharmacist since 1957. “He was asking questions. It seems as though he was searching for some vehicle to register his empathy for the small business person. He was interested in how a small business person, who has been around for 57 years, has managed the competition from the big boxes, the Walgreens and the CVSes .”

Later, Gingrich would weave the story of how the 80-year-old Johnson went into his store on Easter to polish the floors into his talk to about 500 Broughton High School students about the value of finding meaning in work.

At Broughton, Gingrich received a friendly reception where, three years ago, President Barack Obama held a town hall meeting to talk about his health care plan.

Gingrich’s ideas were different from Obama’s. He proposed, among other things, that people be able to join private groups to purchase insurance, where they could use the power of numbers to negotiate lower prices.

The most pointed question came from a student, who, after listening to him talk about the need for more oil and gas exploration in the United States, asked whether he had an energy plan that was “more environmentally friendly.”

Gingrich said it was important for national security and economic reasons for the U.S. to produce more energy. And he said the country had a good record of producing energy with much less pollution than most other countries.

His most enthusiastic supporter was a student who held up a sign that read: “Newter Obama.”