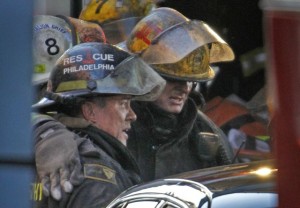 PHILADELPHIA — The old Thomas W. Buck Hosiery building, dominating nearly a full block in the Kensington neighborhood of Philadelphia, was supposed to be converted into 81 apartments several years ago, but instead it sat vacant.

(PHOTO: Philadelphia Fire Department are shown at the scene of a five alarm fire in Kensington section of Philadelphia, Pennsylvania on Monday morning April 9, 2012. The department lost two fire fighters.)

Neighbors lamented its deteriorating and dangerous conditions, fearing the building would burn some day, while its New York owners racked up unpaid tax bills and ignored code violations.

The city moved in February to put the property up for sheriff’s sale, which can take months. In the end, it was all too late to prevent a tragedy that took the lives of two firefighters.

On Monday morning, the enormous brick structure erupted into a five-alarm fire. About a half-hour after the fire was declared under control at 5:21 a.m. EDT, one of the old mill walls collapsed onto the roof of an adjacent store.

Four firefighters inside Giamari Furniture & Bedding were buried under tons of debris.

Two were rescued. But the last two pulled from the rubble — Lt. Robert P. Neary, 60, and Firefighter Daniel Sweeney, 25 — had been killed.

Their deaths marked the Philadelphia Fire Department’s most tragic day in more than seven years.

“The entire city is deeply saddened,” Mayor Michael Nutter said. “Our hearts are filled with sorrow.”

Neary, a 37-year veteran, was close to the end of his tenure. He recently had applied for the city’s Deferred Retirement Option Program so he could leave within the next four years and spend more time with his wife and three children — and his boat.

Sweeney was a young and energetic firefighter, the son of a retired fire captain, just five years into his career.

Both were assigned to Ladder 10 and had been decorated numerous times for saving people from burning buildings.

At noon, black memorial bunting was hung over the station house doors. As is department custom, similar flags will adorn every station in Philadelphia.

Capt. Dennis Merrigan of Ladder 10 said he would address his firefighters, searching for words that could hold the company together in the heartbreaking days to follow. He didn’t know what he would say.

“I’ll try and say something inspirational, something to ease their pain,” Merrigan said. “And I’ll just try not to cry in front of them.”

The two injured firefighters, Francis Chaney and Pat Nally, were taken to Temple University Hospital. Chaney, 43, was treated and released.

Nally, 25, required CPR at the scene of the fire. He remained in the intensive care unit in guarded condition Monday, Fire Commissioner Lloyd Ayers said.

“We feel like he’s going to be OK,” Ayers said.

Deputy Mayor Everett Gillison said officials would consult with the district attorney’s office about whether the building owners could face criminal charges for their apparent indifference to the property’s problems.

The building is owned by Michael, Nahman and Yechiel Lichtenstein, Brooklyn developers who own as many as 34 buildings in Philadelphia under various corporate and partnership names, city officials said.

The Lichtensteins bought the Buck building in 2009. They have a zoning permit for the property that doesn’t expire until July 2013.

Councilwoman Maria Quinones-Sanchez, who represents the area, said the housing slump delayed the plan to convert and rehab the property.

In an article last month, Michael Lichtenstein told the website Hidden City Philadelphia the project was “stuck” but said he was sure “the building is being kept up.”

In response to neighborhood complaints about drug addicts and thieves breaking into the building, the Department of Licenses and Inspections had cited the owners four times since Nov. 8, Gillison said. Violation notices from the city say the owners failed to secure the property.

The Lichtensteins did not respond to any of the citations, Gillison said.

“This isn’t a landlord or landowner we couldn’t find,” L&I Commissioner Fran Burns said. “I don’t understand, when you have a zoning permit for an 81-unit development, how you don’t understand your responsibility to have a secure property.”

The Lichtensteins could not be reached Monday. A New York lawyer released a statement on their behalf, calling the fire “an unspeakable tragedy.”

“Our condolences and heartfelt prayers go out to the families of Lt. Neary and Firefighter Sweeney, and to their grieving colleagues at the Philadelphia Fire Department,” the lawyer, David Feuerstein, said. “We are cooperating, and will continue to do so, with all law enforcement and government agencies as they investigate this fire.”

Jeff Carpineta, president of the East Kensington Neighbors Association, said he and other residents had long feared the building would catch fire because so many vagrants went in and out of it.

“We knew this was going to happen,” Carpineta said. “One by one, all the old textile mills in this neighborhood are burning down, and this city is not taking steps to deal with it.”

The five-story, U-shaped building with an interior courtyard had long been a target of looters and squatters, he said. There is little lighting near the building, and neighbors have seen people coming and going.

“The building is being scrapped, people are opening the gates, the windows,” he said. “Some neighbors sealed the gate, but it got ripped open again.”

The fire was under investigation Monday. Given that the building was reduced to rubble, finding the source could be difficult, Ayers said.

“We’re planning on the fire marshal being there for some time,” he said.

Eric Osler, who lives a few blocks from the scene, said he awoke to the sound of an explosion.

“I heard a pop-pop-pop, then a boom,” he said. “I thought it was gunshots, because you know how it is here.”

Once he saw the blaze, he woke his girlfriend and got his three children dressed, fearful the fire would reach his block.

“The embers were going right over our heads,” he said. “You stood here, you saw it dropping all over the place, setting things on fire as it fell out of the sky.”

The four firefighters who went into the furniture store were doing what Ayers called a routine check to ensure flames there had not reignited.

“That’s when the collapse happened. … They were buried in debris,” he said. “Our teams had to cut timbers, remove debris and bricks to get to them.”

Chaney and Nally were rescued within 26 minutes, but the last man — Sweeney — wasn’t pulled from the rubble until an hour and a half after the collapse.

Sweeney’s parents and three sisters gathered Monday night at their home in Northeast Philadelphia. They described a young man with a dry sense of humor who loved working out.

The younger Sweeney followed his father, David Sweeney, into the job after graduating from Bishop McDevitt High School.

“He was very dedicated in all endeavors,” the elder Sweeney said. “He loved his family, he loved his life.”

Neary was a veteran officer respected for his quiet, steady leadership and devotion to his craft, Merrigan said.

“He was always dedicated to his platoon and his guys,” the captain said. “Whatever had to be done, we knew it could be done when he was on it.”

If Neary could be found at the kitchen table wearing his reading glasses and researching firefighting tactics on his laptop, Sweeney would be bounding through the locker-room doors, sweaty from another workout.

“He was a good, energetic kid who worked hard, who loved the job,” Merrigan said. “What can you say about the loss of such a promising kid at such a young age?”

This was the department’s worst day since August 2004, when Capt. John Taylor, 53, and Firefighter Rey Rubio, 42, perished while fighting a blaze in a Port Richmond basement that had been converted into a marijuana greenhouse.

The man who was renting the home was convicted of involuntary manslaughter in 2005 and sentenced to 15 months to four years in prison.

Nutter, who returned Monday night from a conference in Tallahassee, Fla., on race and justice, ordered the city’s flags to fly at half-staff for Neary and Sweeney.

For Carpineta, this was a tragedy that could have been avoided if more attention had been paid to the old mill.

“These men walked into that building … not knowing it was going to be the last night of their lives,” he said. “It’s heartbreaking.”