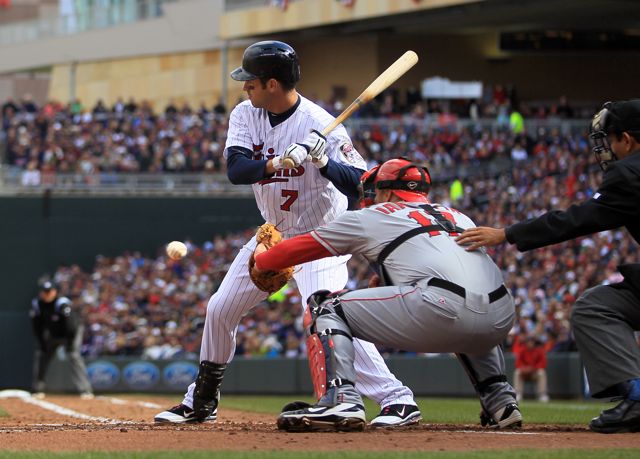 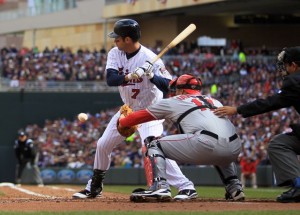 MINNEAPOLIS — Each of the first two home openers at Target Field ended with a capacity crowd on its feet and a thunderous roar as a pop fly settled into the glove of a Twins fielder — Michael Cuddyer in 2010 and Matt Tolbert in 2011 — securing victory on a 60-something degree April afternoon.

The weather was about 20 degrees colder Monday, and so was the home team.

By game’s end, the stands were less than half-full, as Danny Valencia grounded to Angels shortstop Erick Aybar, who threw across the diamond for yet another infield out, finishing a quiet, 5-1 loss for the Twins.

At 0-4, they’ve matched their worst start since the franchise moved to Minnesota in 1961. As history shows, they lost their first four games in 1969 before Harmon Killebrew, Tony Oliva and Rod Carew rallied them to the postseason. The Twins hope this doesn’t turn into 1981, when they started 0-4 and finished 27 games under .500, especially after last year’s disaster.

“It doesn’t have that feel,” Twins pitcher Glen Perkins said. “I think we’ve got our guys here, and our guys are healthy. Where we were in August and September is a pretty dark place, and I don’t think we’re there, this year. I think it’ll click.”

The Twins better hope it clicks soon. They looked awful last weekend, getting outscored 15-5 in a three-game sweep against the long-downtrodden Orioles. And after honoring their 2002 team in a stirring pregame ceremony, the Twins couldn’t even make it through a half-inning without deflating their fans again.

The Angels grabbed a 2-0, first-inning lead against Nick Blackburn, handing it to lefthander C.J. Wilson, their $77.5 million free agent acquisition. Before the game, Angels right-fielder Torii Hunter explained why he’s glad to have Wilson on his side.

Leading off the fourth inning, Josh Willingham smashed a first-pitch change-up into the left-center field seats for his second home run as a Twin. But that was the only gift Wilson presented all day. Blackburn settled into his own groove, retiring 15 in a row at one point, but the Angels pulled away in the seventh.

Bobby Abreu walked, and then Alberto Callaspo hit a grounder up the middle. Shortstop Jamey Carroll dove, but the ball squirted off his glove for a single.

“I overplayed it,” Carroll said. “I thought I was going to have to dive a little bit, and it ended up kind of slicing back to me. I should have made it. It ended up being a big play. I think we could have gotten a double play out of it.”

Chris Ianetta followed with a two-run double on a long fly ball that fell between Willingham and Denard Span in left-center field. That finished Blackburn’s day, and two batters later, Aybar executed a perfect suicide squeeze bunt, making it 5-1.

That was plenty against a Twins offense that has scored just six runs in four games. They put at least one runner on base in eight of nine innings, but also hit into four double plays.

“You don’t ever want to start and put yourself in a big hole,” manager Ron Gardenhire said. “It’s frustrating because we came out of spring training playing good and feeling good, and we haven’t played up to that.”

Players will use Tuesday’s off day to get settled in the Twin Cities. They flew straight from Fort Myers, Fla., to Baltimore and didn’t arrive in Minnesota until Sunday night. They can unpack and try to clear their minds.

Yes, it’s only been four games and there are 158 to go, but there is plenty of urgency to win Wednesday night, even if the next pitcher is Jered Weaver, who tossed eight shutout innings against the Royals with 10 strikeouts on Opening Day.

The mass exodus of fans after the eighth inning proved they won’t stand for it, either.