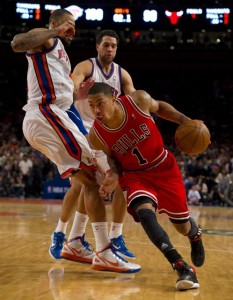 NEW YORK — You can tell yourself it was just a regular-season game. You can point out the flaws, that the Knicks blew a 21-point lead, that they nearly shot themselves out of the game.

(PHOTO: Derrick Rose of the Chicago Bull drives to the basket past Tyson Chandler and Landry Fields of the New York Knicks at Madison Square Garden in New York, Sunday, April 8, 2012. The Knicks beat the Bulls, 100-99 in overtime.)

But as Carmelo Anthony danced up and down the floor at Madison Square Garden, shouting, “My house” as the crowd went crazy, it was clear that this was something more.

The Knicks, with so many things at stake Sunday afternoon, staged an exhausting battle with the Chicago Bulls and, when the final punch was thrown, escaped with a 100-99 overtime victory.

All of the flaws disappeared in the celebration and really, they disappeared in the final seconds of OT as the Knicks scrapped their way to the win. Anthony rose up as the clock ticked down in overtime. He’d just misfired twice inside and J.R. Smith missed a three-pointer. But Tyson Chandler punched out an offensive rebound to Smith, and the ball went back to Anthony.

He dribbled in front of Luol Deng, lifted and fired. As the three settled through the net with 8.2 seconds left, the last of his season-high 43 points, Anthony bounced his way all the back to the Knicks bench — a lap he would repeat when Derrick Rose missed on the other end at the buzzer.

“It was a great atmosphere,” Anthony said. “That’s how the Garden’s supposed to be. This was a playoff game. We might play these guys in the playoffs if we keep going and get that (eighth) seed. This was a big statement game. We willed this one today.

The game was the first of a three-game set that continues with another meeting with the Bulls on Tuesday in Chicago, followed by a game in Milwaukee on Wednesday. With the victory and a los by the Sixers, the Knicks are tied for seventh in East’s playoff race — and one game ahead of the Bucks.

“I tried to use it as a playoff atmosphere, a playoff game, knowing that we gotta play them back to back and there’s a chance that could see them in the first round,” said Knicks coach Mike Woodson.

With everything to prove, the Knicks were on their way to a blowout win. Up 9-0 and then 27-6, the Knicks not only were proving that they belong in the playoffs, but also showing that if they got there, the Bulls might not want to find them waiting in the first round.

Then reality set in. Derrick Rose, who was returning to action for the first time since March 12, had come out rusty. Then, slowly, he settled in and so did the Bulls. By the end of the game Rose had 29 points, even if it was just on 8-of-26 shooting. The 21-point lead wiped out, the Bulls came all the way back and blew past the Knicks to build a 10-point lead with less than four minutes to play.

And then a new reality set in.

All game long the Knicks fought defensively. Iman Shumpert shadowed and harassed Rose. Even Anthony was playing frenetic defense. The Knicks fought back, got chances when the Bulls misfired four straight times from the line in the final 34 seconds and tied it on an Anthony three with 11.2 seconds left that sent the game to OT. Leading 99-95 in overtime, the Bulls again went silent.

After Anthony scored to close the gap to two with 1:04 left, Smith stole the ball from Rose and the Knicks fought for one last chance. Anthony missed twice inside, but Chandler batted the rebound out to Smith, setting up the shot for Anthony to give the Knicks the lead.

“We had a lot of chances out there,” Anthony said. “If I take this shot and make it, we win. If we don’t, we lose the basketball game.”

They didn’t this time, instead pulling it out and preserving their place in the postseason for another day.