Cubs make it interesting but pull out 1st win of season 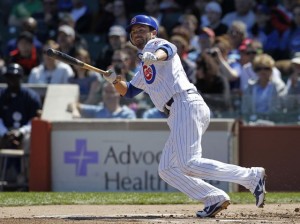 CHICAGO — The Cubs aren’t going to make life easy for anyone this year, whether it’s their manager, their fans or the team psychiatrist.

Jeff Samardzija was cruising toward a complete game against the Nationals in the ninth inning Sunday before a two-out error by Starlin Castro and a two-run homer by Adam LaRoche pulled Washington within a run.

Could it possibly happen again? Another Cubs implosion?

As Wrigleyville held its breath, closer Carlos Marmol came in and walked the first batter, conjuring up memories of the first two blown games by the Cubs’ bullpen.

But Marmol induced Xaver Nady to pop out, ending a dramatic 4-3 win before 31,973 at Wrigley Field.

For Samardzija, the nail-biting win was about as sweet as it gets.

“I really feel like I have a chip on my shoulders, because I’ve talked a big game about wanting to start and made it public,” Samardzija said. “I don’t want to look like an idiot.”

“An unbelievable performance, (except for) one pitch (to LaRoche),” manager Dale Sveum said. “He probably got a little excited there.”

It was the first win under the Theo Epstein regime, and the first for Sveum as Cubs’ manager after two tough losses.

“To win one like that was fun,” Sveum said. “They’re all going to be nerve-wracking.”

Samardzija’s performance was the third straight strong outing by a Cubs starter, following the efforts of Ryan Dempster and Matt Garza. Three straight quality starts bodes well for the Cubs in the early going, despite the failings of Marmol and Kerry Wood.

After Samardzija finished the eighth at 90 pitches and the Cubs added a pair of runs to make it 4-1, Sveum let Samardzija go back out, while having Marmol warm up just in case. After Castro’s throwing error on a Ryan Zimmerman grounder kept the inning alive, Sveum heard boos as he went out to the mound to visit Samardzija, who was then at 105 pitches.

Samardzija said Sveum was just trying to calm him down, and never intended to take him out. Sveum insisted Samardzija “said the right things” that convinced him to leave his starter in.

“One hesitation and I think he would’ve been out of the game,” Sveum said. “For him never getting that far in during a big league game … there were some tough decisions, but he really didn’t have a lot of stress all day.

“He’s a big guy, a big horse, and hopefully he bounces back from that because (110 pitches) was not something I wanted to do. But he was throwing the ball so well it was tough to take him out.”

After LaRoche’s homer made it a one-run game, Sveum had no choice.

“LaRoche is a great fastball hitter, and I went a little ‘Garza’ on everybody and tried to blow his doors off, and he took it about 400 feet to right,” Samardzija said. “That’s the way it goes.”