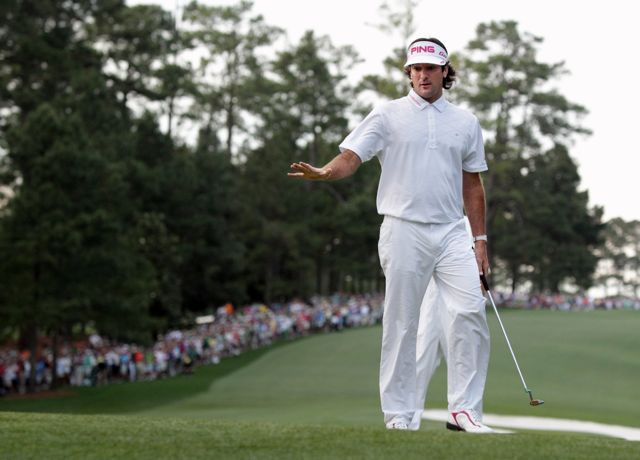 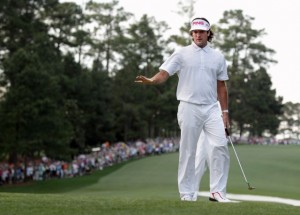 AUGUSTA, Ga. — Put the green jacket on Bubba Watson, winner of a two-hole Masters playoff against Louis Oosthuizen with a recovery shot unlike any other.

(PHOTO: Bubba Watson reacts to missing a putt on the 10th green during a playoff in the final round of the Masters at the Augusta National Golf Club in Augusta, Georgia, Sunday, April 8, 2012.)

From the deep trees right of Augusta National’s 10th fairway, Watson launched a high hooking wedge that somehow found a gap through the branches and landed on the green — stopping 15 feet from the flagstick.

Oosthuizen came up short of the elevated green with his second shot, then sent a chip to the back fringe. His par save curled off just right of the hole, giving Watson two putts to win.

Watson nearly holed it on his first putt, finally tapping in for the fourth victory of his career — and certainly the biggest.

“He hit an unbelievable shot there,” said Oosthuizen, whose double eagle at No.2 previously had produced the biggest roars of the day. “I don’t feel like I played badly. Hats off to him; he deserves it.”

Watson never held the sole lead this week until the 74th hole.

Oosthuizen authored the double eagle just two holes into his round — watching his 4-iron approach roll nearly the entire length of the green and into the cup for a lightning bolt that moved him to the front of the pack.

Watson produced his fireworks along the back nine, recovering from a bogey at the par-3 12th hole with four consecutive birdies to pull even with his playing partner at 10-under.

Mickelson was undone by a triple bogey at No.4, when his tee shot caromed off a grandstand and into some bushes — requiring the lefty to take two swings right-handed to extricate himself from the foliage.

No Masters champion has ever won it with a triple bogey on his card.

There has been a Masters champion with a double eagle, though — Gene Sarazen at the 1935 edition, when his “Shot Heard ‘Round the World” forced a playoff with Craig Wood.

After retrieving the ball from the cup, Oosthuizen tossed it to someone in the gallery, who later donated it to the club.

Tiger Woods completed his stay with a 2-over 74, unable to record a round under par all week and headed for his worst Masters finish as a professional. It came just two Sundays after the four-time Masters champion cruised to a five-shot romp at Bay Hill.

“I had the wrong ball-striking week at the wrong time,” said Woods, adding that he slipped into old swing patterns and couldn’t break out nearly in time. He wound up tied for 40th.

Right alongside Woods was Rory McIlroy, who turned in a 77-76 weekend after reaching the weekend just one shot off the lead.