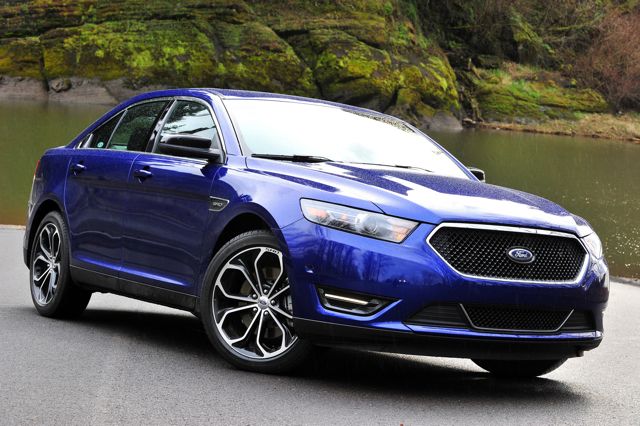 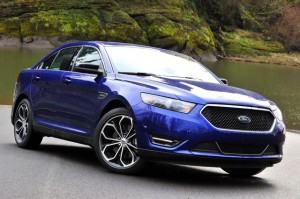 Less than three years after giving its Taurus a complete makeover, Ford Motor Co. for 2013 rolls out a “freshened” version of the iconic large sedan, complete with more high-tech features and better fuel economy.

Among the new technology is an optional system that allows the car to parallel-park itself, something that resonates with female buyers, the automaker said.

Although prices begin at $26,600 excluding destination charge for the base SE model, the Taurus continues its move upscale. The test model — the all-wheel-drive Limited version — has a starting price of $34,850, but our tester topped out at $41,135, complete with options and freight.

That puts the car in the premium class, where it competes with Ford’s own Lincoln luxury brand. Ford says the 2013 Taurus was benchmarked against the Audi A6, whose prices for 2012 begin at $41,700. So if the Taurus is truly an equal, its base sticker price makes it a bargain.

The Limited isn’t even the top model, though. For performance addicts, the Taurus SHO continues in the lineup with a base price of $39,200.

Ford says the 2013 Taurus has an enhanced design that includes an “imposing” front end, new trunk lid, full LED taillights, new soft-touch materials in the cabin, and a quieter ride.

For even better mileage, there is a new, optional 2.0-liter four-cylinder engine with 240 horsepower and 270 foot-pounds of torque, delivering EPA ratings of 22 city/31 highway.

The SHO (Super High Output) model, which Ford calls a “sleeper performance vehicle,” retains the 3.5-liter EcoBoost turbo engine from 2012. It produces 365 horsepower and 350 foot-pounds of torque, and has EPA ratings of 17 city/25 highway.

Available with the SHO is the Performance Package, which adds a special sport-tuned suspension with unique dampers and springs; performance brake pads and unique track-tuned calipers; electronic stability control with a setting for track driving; a 3.16-1 final drive ratio for quicker starts; an “extreme-duty” cooling system; and 20-inch painted/machined wheels with 245/YR20 summer-compound tires.

All Taurus models come with a six-speed automatic transmission, and no manual is offered even on the SHO. Each engine has its own version of the six-speed gearbox, however.

All-wheel drive is standard on the SHO, and optional on the Limited and midlevel SEL versions; SE models come only with front drive.

The all-wheel-drive models with the base V-6 engine take a big hit on fuel economy — 17 city/25 highway, the same as the SHO with the bigger engine.

I had the opportunity to drive the Limited AWD model in a snowstorm in Oregon during a recent Ford media event for the vehicle. I found the car to be quite adept at dealing with the slippery roads, even when I wasn’t following a snow plow through mountain passes.

The Taurus Limited has the look, feel and driving characteristics of a premium sedan, so much so that it’s easy to imagine oneself in a luxury brand rather than “just” a Ford. But the line between “regular” and “luxury” brands gets more blurred every year, with prices being the only real differential on some of them.

There was plenty of power from the base V-6 engine, although I didn’t get to try much in the way of high-speed driving on the wet and snowy roads. Shifting of the six-speed automatic was quite smooth, and it didn’t seem to be “hunting” for the right gear on either uphill or downhill runs.

The ride was smooth and quiet, and the driver’s seat quite comfortable. There is room for up to five adults inside, and there is plenty of legroom for the rear passengers.

This car is designed to give everyone on board a good experience. And while most people wouldn’t want to be stuck in the middle position of the back seat in any car for a long time, it’s not as bad in the Taurus as it is in many others.

With the redesign of the interior, the 2013 Taurus has new seat fabrics and cloth-wrapped door pillars. The headrests are now four-way adjustable, which helps limit neck fatigue on a long ride.

Coming later this year will be the EcoBoost 2.0-liter engine. It has some special features, including 5W30 oil to reduce internal friction and lengthen the regular oil-change interval to 10,000 miles, Ford says.

The self-parking system — Active Park Assist — comes in an options package along with other new technology, including rain-sensing wipers and heated/cooled front seats. A 12-speaker premium Sony audio system is part of this package, as well.

Adaptive cruise control was included on our tester, along with the voice-activated navigation system. We did not get to test the self-parking system, as that option package was not included on our vehicle.

A less-expensive options package brings some of those items, such as a blind-spot warning system, the heated/cooled front seats, heated rear seats, the Sony audio and automatic high beams. But it leaves out the self-park system.

—Highlights: Ford’s large sedan gets a partial makeover for 2013 after a complete redesign just three years ago. Added is an optional EcoBoost four-cylinder engine, some design enhancements, more technology, and for some models, improved fuel economy.

—Negatives: Can get quite pricey with all the options, especially the Limited and SHO versions.

—Side air bags: Standard front seat-mounted, and side-curtain for all rows.