Survivors tell of bloody aftermath to fight in Taftanaz, Syria 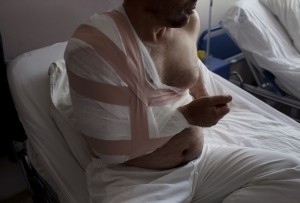 HATAY, Turkey — Wounded Syrians being treated in hospitals here are providing detailed accounts of a bloody battle for the town of Taftanaz in northern Syria earlier this week that left the town devastated and scores of residents and an unknown number of soldiers dead.

(PHOTO: Massous is a Syrian who was wounded in fighting in Taftanaz. An estimated 82 Syrians were killed in an assault by forces of Bashar Al Assad in Idlib province.)

Syrian troops loyal to President Bashar Assad succeeded in gaining control of the town center after two hours of fierce combat, then summarily executed captives and burned bodies, according to the accounts. At least 82 people died, though it was unclear from the survivors how many of those were noncombatants and how many were anti-Assad fighters.

“There’s nothing left,” says Muhammad Razzan, who says he lost nearly 50 members of his extended family that day. “Only bodies. Bodies on the streets, bodies in the homes. We don’t even know where everyone is.”

The Taftanaz assault, which took place on Tuesday, is part of what appears to be a government sweep of rebel strongholds in Syria’s north ahead of a U.N.-brokered cease-fire that Assad has promised to implement next week. Syria does not allow foreign reporters to enter the country, and a military cordon around the town makes it impossible for journalists to reach the site surreptitiously.

But interviews with fighters and civilians who’ve sought medical treatment here provide a rare, nearly contemporaneous account of the fighting and its aftermath. The accounts are uncommon because in addition to allegations that government forces indiscriminately killed civilians, they include details of how armed revolutionaries attempted to resist the Syrian army’s assault.

The Turkish Foreign Ministry has said that record numbers of refugees are now crossing the border to flee the government offensive, with 2,700 crossing on Thursday alone. A total of 23,000 Syrians are now living in refugee camps inside Turkey, the Turkish government said.

Survivors of the fight at Taftanaz said the town had been aware for several days that the army was assaulting one nearby town after another, and that theirs was likely next. By Monday evening, about half the population of 15,000 had fled.

As the army approached, about 200 armed revolutionaries occupied the town center and prepared for the assault. They planted a ring of roadside bombs around the town’s perimeter, positioned fighters on strategically located buildings, and waited.

At 7 o’clock Tuesday morning, tanks advanced on the town and helicopters buzzing above started firing at the rebels. Bullets were “falling like rain,” Razzan said, and residents ran inside their homes. When the tanks struck the roadside bombs, rebels opened fire, raking the pro-government troops with automatic rifles and machine guns. Rebels claim to have killed a number of soldiers, though they offered no detailed count.

The army succeeded in breaking through the defenses after two hours of fierce combat. Pressing their assault street-by-street, pro-government soldiers headed for the town center, creating, witnesses said, a free-fire zone as they went.

As the troops pushed into the town center, the beleaguered rebels proved to be no match. “We have no bullets, no heavy weapons, no advanced radios,” said a fighter known as Zigzig, who escaped with shrapnel wounds to his legs and is now hospitalized in Turkey. “We are just waiting to die. What can we do?”

In one compound, a fighter named Eyad said he and his comrades resisted until they were surrounded, at which point some of them climbed to the roof of a building to signal their surrender. But soldiers unleashed a barrage of fire, killing almost everyone inside the building and on top.