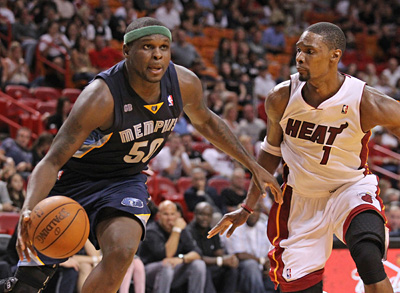 By Joseph Goodman, McClatchy Newspapers –
MIAMI — With about four minutes remaining in the first quarter, the Heat’s long-time All-Star shooting guard, Dwyane Wade, one of the most explosive leapers in the NBA, had a clear path to the basket and was closing in on the rim like some apex predator hungry for a meal.

So wide open was Wade that Memphis’ interior defenders backed away from the basket to concede what surely would be a highlight-reel dunk — the kind of slam you see on the late-night highlight shows with the sportscaster screaming inane phrases like, “Dunk you very much!”

Wade left the ground and reared his arm behind and above his head. Make no mistake, this was an attack on the rim in an attempt to stimulate his team and the home crowd after a sluggish start to Friday’s game. But gravity, the rim and fatigue conspired against him.

Wade missed the dunk. The rim, not a player, blocked his shot. His point-blank effort bonked off the iron and flew into the air and into the hands of a Grizzlies defender trailing the play.

And that was that. The Heat was done and so was its 17-game home winning streak. Miami, which never led during the game, was defeated 97-82 by a team playing its sixth game in eight nights. A legitimate contender in the Western Conference, Memphis (31-23) has defeated the Lakers, Thunder and Heat in the past two weeks.

The Heat’s Big 3 combined for 60 points, and Miami (39-15) got 10 points from an unlikely source, rookie Terrel Harris, but the team lacked the energy to properly defend a Memphis squad with an inside trio of Marc Gasol (10 points, nine rebounds), Zach Randolph (14 points, 14 rebounds) and Marreese Speights (15 points, five rebounds).

The Heat trailed by at least 10 points for the entire second half and started the game with 11 turnovers in the first quarter, a season high. Led by the ineptitude of guards Mario Chalmers and Norris Cole, who combined to go 0 for 9 from the floor, the Heat shot just 40.2 percent.

Signs of exhaustion were everywhere. Wade lacked his normal lift, LeBron James shot and missed a hopelessly flat-footed layup in the third quarter and, in the end, Chris Bosh (19 points, four rebounds) could barely jog the length of the court after a defensive stop.

“Everybody’s fatigued,” said Wade, who had 20 points and seven rebounds. “That’s the kind of season it is.”

Despite the evidence, Heat coach Erik Spoelstra rejected any notion that his team lost because it was tired.

“I didn’t think it was a matter of energy or lack of energy but certainly the lack of concentration and focus in that first quarter — the turnovers — we simply just couldn’t make up for that,” Spoelstra said in the opening statement of his postgame news conference.

When asked about a possible fatigue factor, Spoelstra reacted with an animated retort.

“This is becoming such a story line now,” Spoelstra said. “We used to joke about it years ago that the media will start talking about resting guys three weeks, a month before the season ends. This is absurd.

“Does everyone feel 100 percent? No. Is there some physical fatigue? Yes. Is there some mental fatigue? Probably. Every team is going through that. We’re not going to shut it down with three weeks to go. That type of storyline is getting ridiculous.”

Spoelstra paused but then continued with his grand finale.

On Friday, the Heat shut it down after the third quarter. Miami cut the Grizzlies’ lead to 60-50 but could get no closer. Led by 19 combined points from James and Wade, the Heat shot 56.5 percent in the third period. But the Grizzlies answered with big buckets of their own, including a pair of three-pointers by Mike Conley and a three-point play by Gasol.

Also significant: Memphis did not commit a turnover in the third quarter and finished with just 12 for the game. The Heat had 16 turnovers.

“When we turn the ball over, we’re not that good, and we know that,” said James, who finished with 21 points, six assists, six rebounds and two steals.