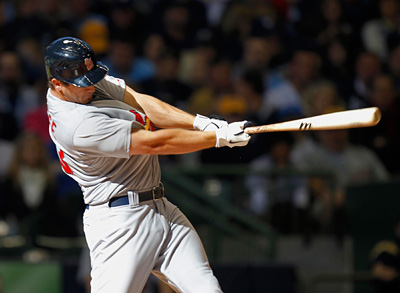 MILWAUKEE — Back at the same place they left the Milwaukee Brewers last October, the Cardinals showed their rivals what was true last autumn still holds for this April.

(PHOTO: The St. Louis Cardinals’ David Freese follows through on a home run swing in the fourth inning against the Milwaukee Brewers. The Cardinals defeated the Brewers, 11-5, at Miller Park in Milwaukee, Wisconsin, Friday, April 6, 2012.)

An early lead does not assure a winning conclusion.

The Cardinals overturned Milwaukee’s two-run first inning and then overwhelmed the Brewers with a show of might that included four home runs. The Cardinals’ new-look lineup strafed Milwaukee with 16 hits Friday and an 11-5 rout, their second decisive victory in an opponent’s season opener in as many games.

“They jumped on us early. They were ready to go,” said David Freese, whose previous game at Miller Park ended with him receiving the National League championship series MVP trophy. “Hopefully that ability (to come back) defines our team again.”

Freese contributed a two-run home run and three RBIs to the Cardinals’ onslaught, but it was the depth of the lineup that was truly on display during opening day in Milwaukee. The Cardinals got solo homers from Yadier Molina, Matt Holliday and Carlos Beltran. Five different Cardinals who had an RBI and an extra-base hit also had a walk. Eleven Cardinals got at least a hit. Every spot in the order produced at least a run.

Leadoff hitter Rafael Furcal echoed his opening night frolic in Miami on Wednesday with another three hits and another stolen base.

“We know that we can score runs,” said Beltran, who added a steal to his homer, walk and two runs scored.

Manager Mike Matheny added: “I’ve heard a number of people talk about this team not being a home-run team. There are some guys in here with the ability to put up some pretty good numbers power-wise. … You’re going to see guys putting together consistent good at-bats. (This) was a good show of that.”

The show was supposed to be Milwaukee’s.

A crowd of 46,086, the second largest in Miller Park’s 12-season history, attended to welcome back a team that won 96 games and the National League Central Division title last season. Ryan Braun took his first at-bat since a winter that started with his MVP award and then soured as he was suspended for 50 games for a positive drug test, a suspension he successfully contested. Two ovations for Braun fit snugly into the opening-day festivities.

What didn’t was anything about the division title, the club’s first in almost 30 years. A decorative pennant for it was placed in the left-field stands months ago, but there was no grand unveiling.

“Our banner is cooler,” he said.

The Brewers pounced on the defending World Series champs in the first inning. Two batters and four pitches into his first start of the season, lefty Jaime Garcia was behind 1-0 and faced Braun with a runner at third base. Milwaukee would leave the first inning with a 2-0 lead, but that was it in six innings against Garcia (1-0). The lefty, who was prone to unraveling at times last season, remained calm and eventually started collecting outs, efficiently.

By the time Freese’s third RBI of the game chased Milwaukee starter Yovani Gallardo (0-1), Garcia had 12 outs on 57 pitches. Gallardo got 11 from 89.

“It’s part of the experience you get,” Garcia said “You’re in a situation like that and being able to stay in the game (means) forgetting about what happened the hitter before, the inning before.”

In a curious collision in the fifth inning, the Brewers sabotaged their last chance to dent Garcia and nibble into the Cardinals’ lead. With runners at the corners, Jonathan Lucroy crashed into Daniel Descalso as the latter tried to field a ground ball. Lucroy, who was later hit by Kyle McClellan’s errant curveball, was ruled out, and the runner who scored had to return to third.

Molina started with an opposite field shot on the first pitch of the second inning. Beltran tied the score at 2-2 when he got the green light from the bench to swing at a 3-0 pitch and landed it on the concourse. On Gallardo’s next pitch, Holliday homered. Freese added two of his five RBIs so far this season with a homer a batter later.

Such power was only the punctuation from an offense that proved patient at the plate — seeing 21 pitches from Gallardo in the first inning — and assertive on the bases with two steals and two runners scoring from first on doubles.

“They do it all,” Gallardo said.