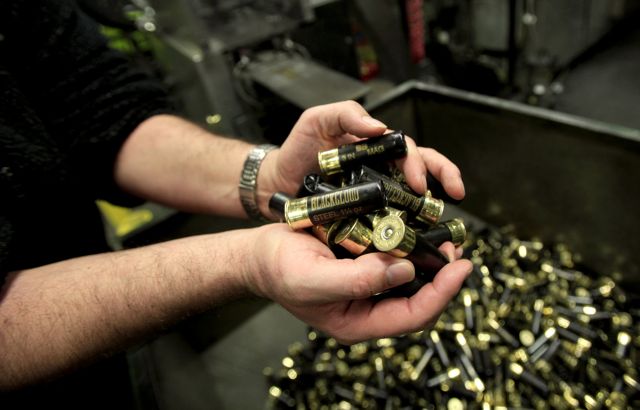 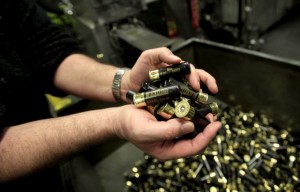 MINNEAPOLIS — With a workforce that has doubled in the past decade, the Federal Cartridge plant in Anoka, Minn., owes its growth to those who own firearms for hunting, sport shooting and, more than ever, personal protection.

(PHOTO: Shells are ready to be filled with BB’s at Alliant Techsystems manufacturing facility in Anoka, Minnesota, on March 8, 2012. Alliant’s commercial products group has been the fastest growing part of the company’s business in recent years, and is taking on a more prominent role as military and NASA-related business flattens out.)

About 1,400 people at the sprawling complex produce everything from low-caliber ammunition for weekend warriors to powerful cartridges for safari hunters. The shotgun shells area alone turns out more than 40 million rounds a month, an increase of about 20 percent from last year.

Federal Cartridge is the centerpiece of Alliant Techsystems’ commercial division, whose plants nationwide make 21 brands of ammunition and accessories like holsters for non-military customers.

For the past few years, commercial ammunition has been Alliant’s fastest-growing business, fueled in part by Americans’ increased concern over their safety and fears that stricter gun control laws could be ahead, company officials say. The segment’s performance has helped Alliant offset declines in its aerospace and defense segments due to federal budget cuts and the end of the U.S. war in Iraq.

While Alliant can claim a piece of some markets, like missile components or military weapons, it is the undisputed leader in making ammunition for both military and non-military customers, a division that produced more than $900 million in sales last year.

Revenue for the commercial segment, recently renamed the sporting group, continues to be buoyed by rising gun sales. Firearm ownership in the U.S. has never been higher, with more than 300 million guns in civilians’ hands, said Larry Keane, a senior vice president at the National Shooting Sports Foundation, or NSSF.

“It’s what’s referred to as ‘the Obama factor,’ ” Keane said. “Individuals concerned about future restrictions have been stocking up.”

FBI background checks on gun buyers — a key barometer of civilian firearm and ammunition sales — have grown dramatically since 2008. So have federal excise tax collections on guns and ammo, up 45 percent from 2008 to 2009, according to the Treasury Department.

Background checks through the end of February rose 12 percent from last year, according to figures from the FBI’s National Instant Criminal Background Check System.

Alliant, which recently moved its headquarters from Eden Prairie, Minn., to Arlington, Va., has owned Federal since 2001, when it bought the business as part of a $235 million acquisition of Blount International’s sporting equipment group.

“It was a nice fit with what (Alliant) already had in small-caliber military ammunition,” Johnson said.

Alliant got its start in 1990 when Honeywell Inc. spun off its government-related defense business and became a player in the space program when it acquired Thiokol Propulsion in 2001. “It was chance to branch out from aerospace and defense,” Johnson said.

The commercial business grew from $258 million to $930 million in annual sales in the Past 10 years, accounting for an ever-larger part of Alliant’s overall sales, which totaled $4.8 billion last year.

Rising commercial sales also are helping Alliant offset a recent setback in its military business — the loss of a contract to run a large Army ammunition plant in Virginia. The company has said losing the contract to British defense contractor BAE Systems will trim Alliant’s revenue by about $170 million next year.

The sporting group’s 22 percent increase in sales last year was fueled in part by Wal-Mart’s decision to start selling shotguns, rifles and ammunition in more of its stores. Other major customers include Cabela’s, Dick’s Sporting Goods, Bass Pro and Gander Mountain.

In addition to civilians, the sporting group also markets ammunition and accessories to security companies and law enforcement agencies, which have increased their spending since the Sept. 11, 2001, terrorist attacks. Alliant recently won renewal of a contract to make up to 450 million rounds of ammunition for the U.S. Department of Homeland Security and U.S. Immigration and Customs Enforcement.

Sales to law enforcement agencies overseas offer Alliant an opportunity to increase its business outside the U.S., now less than 15 percent of total sales. Johnson said Alliant spent two years working with French authorities, developing and testing ammunition, before winning a $14 million contract for France’s national police department in 2009. The company used its research with the French to win law enforcement contracts in Australia and Japan.

Even so, Johnson said about three-fourths of his group’s sales are to civilians. Keane at the NSSF said firearms retailers report that many are first-time buyers. “That’s supported by the increased popularity of firearms safety and education classes,” Keane said.