Sergio Garcia back in contention at Masters 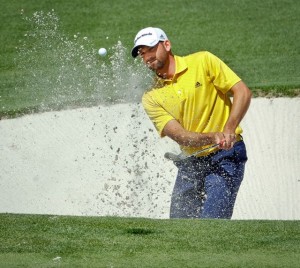 AUGUSTA, Ga. — For a long time, Sergio Garcia was considered the best player in the world without a major title on his resume.

(PHOTO: Sergio Garcia blasts from the bunker on the 15th hole during the second round of The Masters at the Augusta National Golf Club in Augusta, Georgia, Friday, April 6, 2012. McIlroy is tied for third.)

That dubious distinction might now sit on the shoulders of Lee Westwood. Both players have a real shot to change that this weekend at Augusta National Golf Club.

Garcia and Westwood are one shot out of the lead at 4-under-par 140 and tied for third with three other players entering the third round of the Masters.

Garcia definitely was good Friday as he shot a 4-under 68 to go with a 72 in the first round. He had six birdies and two bogeys in Friday’s round and has hit 24 of the 28 fairways so for but only 22 of the 36 greens.

“It was very cold in the morning, quite breezy,” Garcia said. “So it was tough conditions. But fortunately the sun kind of came out, and it definitely made a difference. It felt much warmer, and probably the wind kind of slowed down a little bit from the morning.

“Under the conditions (in the first two rounds), I played pretty nicely.”

Garcia, however, struggled with the final hole each day. He bogeyed the 18th hole in both rounds.

“It’s playing very long,” Garcia said. “I hit a very good drive to the front pin, which I’ve hit wedges and sand wedges into that, and I hit a 5-iron. It’s just playing long, and that fairway, it’s quite muddy. It’s difficult to get a clean ball on your second shot. It just brings a lot of doubt in your head.

“So, that would have been nice to finish with a par. But unfortunately it didn’t happen.”

Westwood also struggled to the finish in his round. He had 10 straight pars to open play Friday and had two birdies and a bogey to head to the 18th hole at 6 under.

But Westwood had a double-bogey on the final hole.

“I’m not going to be too far off the lead,” Westwood said when he finished his round early in the day. “That’s a position you want to be in.”