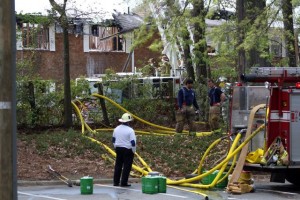 VIRGINIA BEACH, Va. — Fire crews are searching an apartment complex near Naval Air Station Oceana that was struck Friday by a Navy jet, although there have not been reports of additional victims or fatalities.

(PHOTO: Emergency and fire crews respond at an apartment complex, near Naval Air Station Oceana, that was struck by a Navy jet in Virginia Beach, Virginia, Friday, April 6, 2012.)

Four people, including two pilots, have been transported to the hospital, according to Marc Davis, a Virginia Beach spokesman. Their injuries are considered minor. The airmen ejected before their plane crashed into the Mayfair Mews apartment complex just before noon, authorities say.

No fatalities have been reported.

Tim Riley, of the Virginia Beach Fire Department, said there are no reports of injuries as of 4 p.m. Riley said they haven’t received any reports of missing people.

Five buildings were damaged in the crash, and crews are working to extinguish the fire, Riley said.

A Navy spokesman confirmed that the plane that crashed was an F/A-18 Hornet — a two-seat jet belonging to VFA (Strike Fighter Squadron) 106.

Davis said 63 people have been displaced from the apartment complex, and officials are working to set up a shelter. Most of the people who live in the complex are 55 and older, according to Alexander Coleman, who said his grandmother lives at the complex.

Gov. Bob McDonnell of Virginia issued the following statement: “We are taking all possible steps at the state level to provide immediate resources and assistance to those impacted by the crash of an F-18 fighter jet in Virginia Beach. In the past half hour I have spoken to Virginia Beach Mayor Will Sessoms several times and informed him that all commonwealth resources are available to him as the community responds to this breaking situation. We are monitoring events carefully as they unfold and state police resources are now on the scene. Our fervent prayer is that no one was injured or killed in this accident.”

The Red Cross is dispatching teams to the residential area affected to help with shelter, food, clothing and anything else needed, said spokesman Rob Shapiro.

It might also deploy mental health professionals if needed, he added.

“There’s a lot of people who are going to have a difficult time coping with this,” he said.

It is too soon to say how many people were displaced or will need other assistance, Shapiro said.