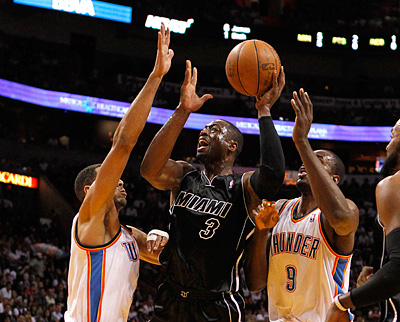 MIAMI — If Miami Heat vs. Oklahoma City Thunder is what the NBA Finals are going to look like, then June can’t get here fast enough.

For now, the Heat will have to settle for racking up home victories, including Wednesday night’s 98-93 decision over the Thunder at AmericanAirlines Arena.

The victory extended the Heat’s home-winning streak to 17, one off the franchise record, and took the sting off the blowout loss two Sundays ago in Oklahoma City.

LeBron James, coming off Tuesday’s 41-point performance against the Philadelphia 76ers, got the best of the marquee matchup, outscoring Kevin Durant 34-30.

Dwyane Wade, back after missing Tuesday’s game with what the Heat termed a bruised left knee, added 19 points.

Russell Westbrook added 28 points for the Thunder, Chris Bosh 12 for the Heat.

The game had a gritty playoff feel throughout, including a pair of second-quarter dustups that left Thunder center Kendrick Perkins with a technical foul and Westbrook with a flagrant foul.

With the Heat up seven entering the fourth, the Thunder opened the final period on an 8-0 run to move within 80-79 and force Heat coach Erik Spoelstra to burn a timeout.

The Thunder then moved into the lead, before a Shane Battier 3-pointer put the Heat up 85-83. On the sequence before, James appeared to reinjure the index finger on his left hand and then Wade took a hard bump to his shoulder.

Battier then came back with another 3-pointer for an 88-83 Heat lead with 6:54, with Durant trimming the lead to two with a 3-pointer of his own.

It stayed close from there, with a wild scramble leading to a jump ball in front of the Heat basket with 1:54 to play and the Heat up 94-93.

The Thunder controlled that tip, but then committed a 24-second violation.

That’s when Bosh stepped up with his first meaningful moment of the game, a 21-foot jumper that put the Heat up 93-96. He had been 3 of 13 from the field to that stage.

Perkins then got inside and was fouled at the rim with 43.6 seconds to play. In his first trip of the line for the night, he missed both, with James securing the rebound.

The inbound pass the went to Durant, who was off with an open 3-point attempt, to fall to 11 of 21 for the night, with the rebound going out of bounds to the Heat.

That sent Wade to the line with 12.3 seconds to play. Shaky at times in his career in such situations, he nailed both for a 98-93 Heat lead.

The teams remained close throughout the third quarter, which ended with the Heat up 80-73.

Both teams got into the bonus early in the third, slowing the overall pace. That also slowed the scoring duel between James and Durant, who shot just 1 of 5 in the third, missing consecutive open 3-pointers late in the period. Durant also had four turnovers in the third.

All the while, Bosh continued to lack an impact on the game, shooting 3 of 10 through the opening three periods.

With rookie point guard Norris Cole again struggling, Spoelstra shook up his rotation, utilizing rookie shooting guard Terrel Harris in place of Cole in the second and third quarters. Harris converted a 3-pointer late in the third period to allow the Heat to extend their lead to nine.

The first half, which ended with the Heat up 50-49, was so compelling that James called it an “early Christmas present” during his television interview at the intermission.

The feel of playoff basketball was there from the outset, heightened in the second quarter when Perkins was called for a technical foul for a rugged stop in the paint against Wade and then Westbrook was hit with a flagrant foul for a dangerous takedown of James in transition.

James said at halftime he appreciated there was no ill-will with Westbrook’s foul, a high-speed hit that could have potentially left Westbrook ejected.

The Heat trailed 23-21 at the end of the first quarter, with Durant scoring 11 in the opening period and James 10.

The Thunder then opened the second quarter on a 13-4 run, to move to a 36-25 lead, conjuring visions of their rout of the Heat two weeks ago in Oklahoma City.

But Perkins’ technical foul and Westbrook’s flagrant lit a fire under the Heat, a fire so intense that backup power forward Udonis Haslem, not even in the game at the time, was admonished by referee Olandis Pool for his chirping from the bench.

James and Durant, the apparent front-runners for NBA Most Valuable Player, dueled throughout the first half, James scoring 23 in the opening two periods, Durant 15. The Thunder trailed by only one at the break despite Westbrook shooting 4 of 15 in the first half.

It was James’ 10th 20-point half of the season, and the fifth time he has had a 20-point first half.

The Thunder won the first meeting 103-87 a week ago Sunday, behind 28 points, nine rebounds and eight assists from Durant.

The Thunder entered having won four of the previous five meetings and three of their previous four visits.

Oklahoma City had been idle since Monday’s home loss to the Memphis Grizzlies. The Heat were coming off Tuesday night’s victory over the visiting Philadelphia 76ers.