Lakers grind out win over Clippers 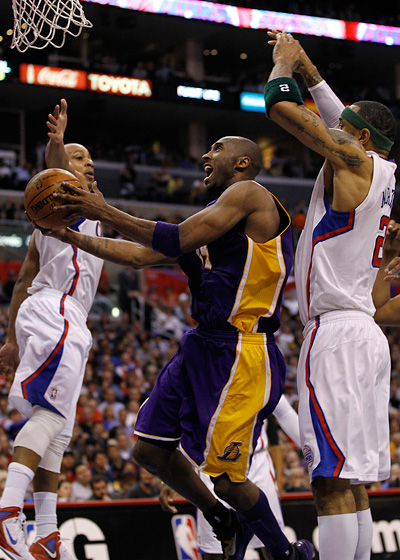 LOS ANGELES — They all say publicly that it’s not a rivalry — and it seems as if both the Clippers and Lakers are right about that.

The Lakers say the Clippers have to win more games before it’s truly a rivalry. The Clippers don’t dispute that.

The Lakers won the season series, 2-1, and moved 2 ½ games ahead of the Clippers in the Pacific Division. Andrew Bynum and Kobe Bryant made sure it remained almost two decades since the Lakers have lost a season series to the Clippers, who last won one when they took three of five during the 1992-93 season.

Bynum scored 36 points and Bryant had 31, the last of which — a 22-foot jumper over Randy Foye with 24.5 seconds left — gave the Lakers a 110-106 lead, helping them hold off the Clippers after they blew a 15-point lead they’d built late in the third quarter.

During a Clippers timeout, Bryant, who also had five rebounds and six assists, floated to the Lakers’ bench with both arms extended like an airplane landing.

The most significant thing about this game is that the Lakers (35-20) now own the tiebreaker over the Clippers (32-22). So if the two teams end the regular season with the same record, the Lakers would be the higher-seeded team in the playoffs.

“We have to just keep playing,” said Clippers coach Vinny Del Negro, whose team is fourth in the Western Conference, one spot behind the Lakers. “It’s not just about the Lakers. It’s about Memphis and Dallas and Denver. It’s everybody. Everything is so tight in the West. We just have to play.”

Caron Butler had a season-high 28 points and Chris Paul had 22 points and 16 assists for the Clippers. But Paul had a big turnover with the Clippers down, 105-104, when Metta World Peace stole the ball from him.

Bynum, who played after missing the previous game because of a sprained left ankle, made one of two free throws for a 106-104 Lakers lead with 1:55 left.

That left the door open for the Clippers, but they never got any closer.

There’s been a definite edginess to the teams’ games this season, and this one was no exception.

There were 11 individual technical fouls called in the first two games.

So it really wasn’t a surprise when a double technical foul was called on Blake Griffin (15 points, 14 rebounds) and Pau Gasol late in the third quarter.

Gasol already was upset because he had been dunked on by Griffin earlier in the third.

The Lakers had built another 12-point lead in the third quarter.

Then all of a sudden, Griffin posterized Gasol with one of his signature dunks, rising up and throwing down a one-handed slam over the Lakers’ 7-footer, his left hand on Gasol’s face. Griffin was fouled on the play by the stumbling Gasol, who was none too happy to be pushed down.

That seemed to ignite the Clippers, who strung together a series of highlight plays.

Foye, who had been struggling all night, scored on a tumbling reverse layup, and DeAndre Jordan threw down a dunk off a lob pass from Paul, pulling the Clippers to within 73-68 midway through the third.

Like his players, Del Negro maintained that there still isn’t a rivalry between the Clippers and Lakers.

The Lakers seemed intent on letting the Clippers and a national television audience know that they still rule Los Angeles.

The Lakers jumped out to a 12-point second-quarter lead before settling for a 63-55 halftime lead.

Bynum and Bryant couldn’t be stopped by the Clippers, and it didn’t matter if they faced a man-to-man defense or a zone.