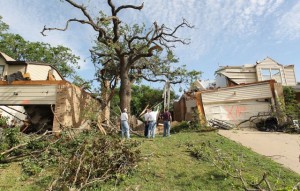 HOUSTON — By the time the ominous black and gray clouds cleared, meteorologists had classified the tornado on their five-point scale as an EF 3, a powerful twister that hit the Dallas suburb of Forney with winds of up to 150 mph.

(PHOTO: Mark Fox, pointing, of the National Weather Service Warning & Coordination Meteorologist, and his staff, examine damage in an Arlington, Texas, neighborhood, Wednesday, April 4, 2012, after severe storms and a reported tornado hit the area on Tuesday.)

It was the strongest of 18 tornadoes that tore through the Dallas-Fort Worth area Tuesday. Texas is accustomed to such powerful twisters, but it’s rare for them to strike urban areas — and when they do, they’re often deadly.

“Normally they’re out in the countryside and fairly harmless,” said Vic Corbelli, a meteorologist in the National Weather Service office in Fort Worth. “We’re very fortunate that more folks were not injured — it was a pretty vicious storm system.”

Miraculously, no one was killed. Only seven people were injured in Forney, three badly enough to be taken to the hospital. The tornado damaged 92 homes and an elementary school, but downtown Forney, a town of 14,000 residents, appeared to have emerged largely unscathed, according to Fire Chief Rick Townsend.

“I feel very, very blessed that we didn’t see more people injured in this,” said Townsend, whose 44 firefighters went house to house, checking on residents and transporting the injured.

Townsend credited outdoor warning sirens with alerting residents to take cover, and said it helped that the tornadoes struck early, during work hours. On Wednesday, he said recovery efforts were well underway, with help from local volunteers.

“There are hundreds of volunteers out helping homeowners right now,” Townsend said. “It’s going to be a tremendous clean-up effort.”

Across the Dallas-Fort Worth area known as the Metroplex, American Red Cross officials said at least 650 homes had been significantly damaged and residents displaced by the storm.

In Lancaster, a suburb about 25 miles southwest of Forney, at least 10 people were injured and 300 structures damaged by a tornado the National Weather Service classified Wednesday as an EF 2 with winds up to 130 mph.

“I am a man of faith and so I believe clearly … a higher power was involved,” Lancaster Mayor Marcus Knight said at a Wednesday morning briefing, noting that a more severe tornado that hit in 1994 killed three residents.

Anita Foster, a spokeswoman for the North Texas American Red Cross, pointed out that although residents in the region are accustomed to twisters, most buildings don’t have basements, due to soil conditions — clay and white rock combined with shallow groundwater.

“So when you have these monster tornadoes touch down, it’s really just a bunch of walls. There’s very few underground locations,” Foster said.

“The Metroplex is the ninth-largest metro area in the country, we’re 6.1 million people spread out over a large area. So when you start seeing these large tornadoes touch down, that’s enough to make anyone’s hair stand on end,” she said. “Without basements, we have to be more prepared than most.”