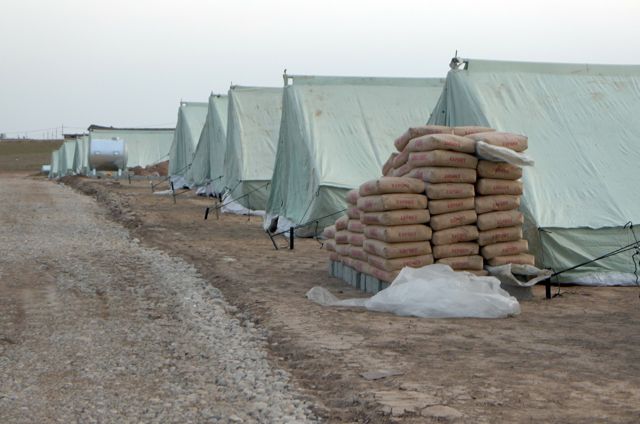 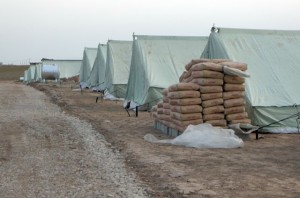 DOMZIN, Iraq — Former Syrian soldiers who have escaped to northern Iraq are telling grisly stories of how their units executed unarmed civilians for demonstrating against the Assad regime and staged mass reprisals when residents shot back, on one occasion lining up and shooting 30 defenseless civilians.

(PHOTO: At the Domzin refugee camp near Dohuk, Iraq, workmen are now building a tent city to accommodate Syrian Kurdish soldiers who deserted the army and are fleeing the country.)

The former soldiers — Syrian Kurds who’ve crossed the mountainous border into Iraq’s Kurdistan region in small groups over the past three months, a group that now totals well more than 400 — also brought tales of colleagues being shot for not firing on civilians. One former noncommissioned special-forces officer even said he suspected that other government troops had orchestrated an ambush his unit endured, in an effort to motivate the unit to kill civilians.

Members of a special United Nations commission of inquiry said they’d heard many reports of soldiers being shot for not shooting civilians but that they hadn’t been able to confirm them. The U.N. investigators said they hadn’t heard reports of government-staged ambushes against its own forces.

Reports of brutality against Syrian civilians in the year since the government of President Bashar Assad has moved aggressively against demonstrators demanding Assad’s removal are nothing new. But those accounts have come largely from members of the opposition or refugees, who’ve told investigators of them.

The testimonies of the former soldiers, however, are the first accounts from individuals who were serving in military units that allegedly carried out the atrocities. They provide new substance to the U.N.’s accusations that the Syrian government may be guilty of “crimes against humanity” for its brutal suppression of the anti-Assad uprising.

With foreign reporters largely banned from Syria, there’s no way to confirm much of what the former soldiers say. But the accounts of more than a dozen deserters whom McClatchy Newspapers interviewed offered a consistent tale of men in uniform who at first tried to avoid carrying out their orders and then fled their country rather than continue to open fire on what they considered to be innocent civilians.

None of the deserters said they intended to return to Syria to take up arms against Assad.

One of the most detailed accounts came from a former soldier who identified himself as Master Sgt. Maxim Kawa, a pseudonym he adopted to protect his family, still in Syria.

Kawa, who said he was 26, said he was based in Homs with the Syrian special forces, an elite unit that was deployed repeatedly in the heartland of the uprising to suppress civilian protesters starting last May. Kawa said the unit’s mission was to protect and clear the way for one of Syria’s 16 security services to seize civilian resisters, but that his unit’s members also were ordered to execute civilians. This they did until something snapped, and top officers were sent in to give them a two-day “re-education” course.

Kawa said the unit mounted repeated assaults on civilian protesters in Baba Amr, a part of Homs that the army retook in February after 26 days of artillery bombardment, in the towns of Rastan, about 12 miles from Homs, and Tel Kalakh, on Syria’s border with Lebanon.

Kawa’s unit occupied Rastan for eight days last May, losing one soldier to an armed local. “Our officers told us that we must take revenge for our friends,” Kawa said. “They pushed us to kill civilians.”

He said his group of about 50 soldiers dragged 30 men out of their houses, tied their hands behind their backs and took them to the town’s main street.

“We put them against a wall and shot them,” he said.

A truck was sent in to collect the bodies, along with tanks to target the town, but there was a dispute among officers over the next step. A top officer ordered the tanks to retreat, but Kawa’s immediate commander countermanded it, saying he was operating under direct command of the minister of defense. “If the tanks retreat, I will shoot you,” he threatened.

“Use up your ammunition,” Kawa quoted his commander as saying. “You must clean the area, so there is no shooting back.”

Yet a day later there was another demonstration of 400 to 500 men, women and children, and as the crowd chanted “Allahu Akhbar” — God is great — his commander ordered the unit to “Shut them up.” First they fired small arms over the crowd. “But they didn’t stop,” Kawa recalled. The commander was angry. “He said, ‘Shell in their midst,’ with a rocket-propelled grenade. I saw with my binoculars that people were killed,” Kawa said.

Kawa said that he and his group “didn’t kill anybody directly. But when they gave us the order to fire a shell, maybe someone has been killed.”

The troops were traumatized. After Rastan, Kawa said, “soldiers were breaking down.” That’s when more than a dozen top officers came to his base and gave two days of what he described as “political orientation.”

The officers told the troops they were being deployed not to kill protesters opposed to the Assad regime but to counter “radical Muslims” who were planning to set up an Islamic caliphate — terminology used by al-Qaida that means a religiously ruled state. “These people are bad people,” Kawa recalled the top officers telling the 300 soldiers in his group. “Take revenge for your friends. You didn’t come here to be killed.”

On their next mission, to Bab Sbaa in Homs, Kawa’s unit was ambushed by what he now thinks was another government unit that had been sent there for that purpose.

“It was at 3 or 4 in the morning, and we were to search the houses and clear the way for the security forces to arrest,” Kawa recalled. As his unit moved into the area, it came under attack from a large truck that blocked the main street. “They were shooting at us,” he said. One soldier was killed and two were wounded.

That same day a close friend in the same unit received a call from his brother, who serves in the Syrian air force intelligence service. “He asked if anything had happened to him,” Kawa recounted. “He told him, ‘We have an order to shoot you.’ ”

Kawa said he now thought that government security forces set up the ambush “just to push us to continue fighting.” The word got around the unit quickly, further depressing morale. The unit was ambushed again two days later. This time, he said, an officer and five soldiers were killed.

A deep rift developed in the unit, Kawa said. He said a lieutenant who defected to the rebels later in the year planned the assassination of the unit’s commander, who was said to have had a direct connection to Assad. He “laid a trap for him by telling people in Rastan about his movements. They assassinated him,” Kawa told McClatchy.

Altogether Kawa’s group carried out four missions to Rastan, eight to Bab Sbaa, five to Baba Amr and many others — as many as 100 in the second half of 2011. Kawa fled Syria on Jan. 5.

For the non-elite troops, harsh conditions, poor food, cancellation of all leaves, corruption among officers and indefinite extensions of service prompted many to plot their escapes. Several said they had to take money from their families to buy food from local merchants. But if caught sneaking off base, they faced beatings, humiliation and a week or more in the brig. They described prison conditions as medieval, with 30 to 40 men packed into a small cell.

“My unit, if it had the chance, would all flee,” said Rolat Azad, 21, who was stationed near the town of Idlib in northern Syria and was interviewed in Domzin, near the town of Dohuk in north Iraq. Like the others, he used a pseudonym. “Maybe 75 to 85 percent of the military, if they had the opportunity, would escape and desert the army. They are not with this regime.”

Corruption is deep-rooted, with officers selling food, access to cellphones, leaves, even allowing those in jail to sleep in guard’s quarters. It cost Azad $500 to have a one-day leave, which he used to escape the army and the country. But leaves have always been for sale. “Before the revolution, one month was $300,” he said.

Another soldier, who gave his name as Diyar and his age as 20, said he’d fled the military after he was told that a close friend in another unit had been executed March 6, apparently for refusing an order to fire on civilians.

Diyar — who was based at a training center for drivers near Dumeir, north of Damascus, for seven months — was, like many soldiers, diverted into joining the crackdown, and took part in seizing houses and arresting civilians. Unprompted, he pulled a photograph out of his pocket that showed his friend Nichervan Ali. “He was shot because he wouldn’t shoot others,” Diyar said.

When he first heard of Ali’s death, he called his friend’s unit and got the official explanation that a friend had killed Ali killed accidentally. It wasn’t until Diyar fled his base and returned to his hometown of Qamishli for his friend’s funeral that he knew Ali had been executed.

“We saw the body. He was shot three times, once in the left chest, once in the right and once at the center, as if he was tied up when he was shot,” he said.

“We heard that there were a lot of defections (in his unit) and he was told to shoot them but refused. So they executed him,” Diyar said.

He said he witnessed security personnel at the funeral approach Ali’s family members and offer to pay them tens of thousands of dollars in compensation if they’d say that terrorists had killed him.