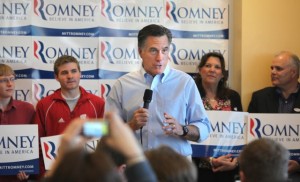 WASHINGTON — Mitt Romney coasted to a primary victory in Maryland on Tuesday, tightening his grip on the Republican presidential nomination.

Romney also looked for an easy win in the nation’s capital, where his chief rival Rick Santorum was not on the ballot, and he hoped for victory in contested Wisconsin — a potential triple play that would give him a commanding lead in delegates.

There were 95 delegates up for grabs Tuesday: 42 in Wisconsin, 37 in Maryland, and 16 in the District of Columbia. Each primary is winner take all; Romney was favored in each.

The voting set the stage for a three-week break from presidential primaries starting Wednesday, poised to rally at last behind Romney as its nominee but still facing a home-state stand from die-hard challenger Santorum.

The three primaries Tuesday in Maryland, the District of Columbia and Wisconsin were expected to add to Romney’s growing lead in delegates needed to clinch the Republican presidential nomination. That lead has prompted many in the party establishment to urge Republicans to coalesce behind Romney and begin focusing on the fall campaign against President Barack Obama.

Santorum vows to stay in the race, though. He’s looking ahead to the next round of primaries on April 24, hoping for a win and a boost from his home state of Pennsylvania, which he served as a U.S. representative and a senator. All but ceding Wisconsin before the polls closed Tuesday, Santorum headed to Mars, Pa., to watch the returns there.

Early polls suggest a close race in the Keystone state, but other states voting in three weeks are Connecticut, Delaware, New York and Rhode Island, a Northeast lineup likely to favor Romney, the former governor of Massachusetts.

He and Santorum fought hard in Wisconsin, but Romney had the advantage of more TV advertising as well as the backing of popular Rep. Paul Ryan and local tea party favorite Sen. Ron Johnson.

About four in five primary voters in Wisconsin told exit polls they believed Romney will win the nomination.

In a primary-day interview, Romney told Fox News that it’s important for the Republicans to “get a nominee as soon as we can and be able to focus on Barack Obama.”

On Wednesday he will address U.S. newspaper editors in Washington, a day after Obama spoke to them.

Romney already had 572 delegates before Tuesday’s voting, exactly half the 1,144 needed to win the nomination, according to an Associated Press tally.

Santorum had 273, former House Speaker Newt Gingrich had 135 and Rep. Ron Paul of Texas had 50.