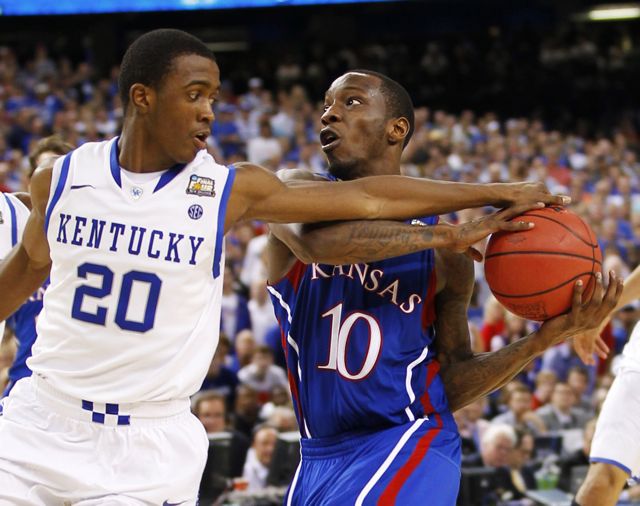 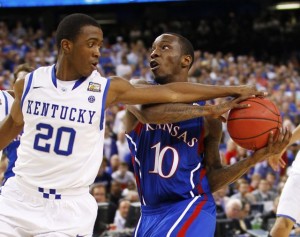 (PHOTO: Doron Lamb (20) of Kentucky defends Tyshawn Taylor (10) of Kansas in the NCAA Tournament finals at the Mercedes-Benz Superdome on Monday, April 2, 2012, in New Orleans, Louisiana.)

Kansas tried to come back from trailing by as many as 18 points Monday night in the Superdome but lost 67-59 to Kentucky. Kansas cut the deficit to five with less than three minutes to play but couldn’t get closer.

The Wildcats bulled their way to a 41-27 halftime lead Monday night in the Superdome, first by roaring past Kansas with transition baskets.

If only Kansas could get Kentucky in a half-court game, more to the Jayhawks’ liking … but that didn’t work either. The Wildcats popped in jumpers.

And all of this was happening while national player of the year Anthony Davis was scoreless, missing all four of his shots.

Davis, however was dominant on the glass with nine rebounds, and Kentucky led in that department 25-14.

The Jayhawks had trailed Purdue by 11 points in the round of 32 and Ohio State by 13 in Saturday’s national semifinal.

Monday, the Wildcats led by as many as 18, the last time at 41-23 when Michael Kidd-Gilchrist scored inside, the last of his 11 points.

Kansas made a final thrust with a pair of late baskets, by Thomas Robinson and a Tyshawn Taylor drive that beat the buzzer. It marked the only time in the half that the Jayhawks scored on successive possessions.

But otherwise it was miserable half for Kansas, especially on defense.

Robinson and Taylor each had eight points for Kansas.

The entire half played out like the second half of the Wildcats’ victory over Kansas in New York in November, when Kentucky pulled away for a 10-point victory.

A first-half highlight for Kansas: Jeff Withey blocked two shots, which gave him 29 for the NCAA Tournament, tying Florida’s Joakim Noah for the most in a tournament.