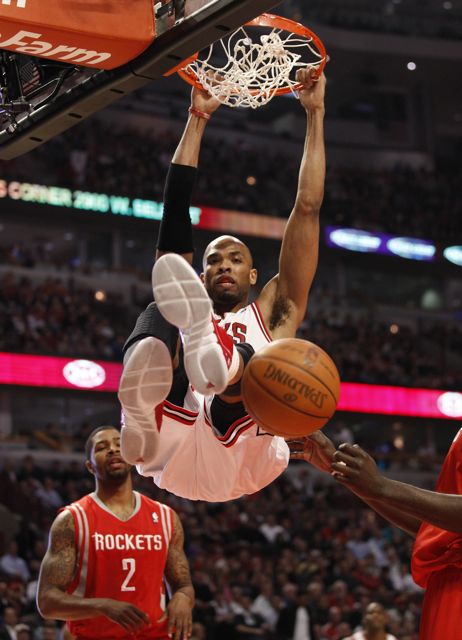 CHICAGO — Thanks to the come-from-ahead debacle that resulted in a 99-93 loss to the Rockets on Monday night at the United Center, the Bulls suffered consecutive regular-season losses for the first time since Feb. 5-7, 2011.

(PHOTO: Chicago Bulls forward Taj Gibson (22) hangs on the rim after dunking in front of Houston Rockets forward Marcus Morris (2) during the first half of their game at the United Center in Chicago, Illinois, on Monday, April 2, 2012.)

And, no, it hadn’t been that long since Richard Hamilton played.

Hamilton finally returned after losing 14 more games to the right shoulder injury he suffered March 5 against the Pacers, posting six points, three assists and five turnovers in 19 rusty minutes. Rust, however, is better than rest.

The Bulls’ collapse, during which they coughed up a 15-point lead, overshadowed Hamilton’s return. Especially since the Bulls’ streak of 86 games without two straight regular-season losses marked the second-longest streak in NBA history, nine shy of the 1997-99 Utah Jazz’s mark.

Goran Dragic’s 21 points led a balanced Rockets’ attack of five players in double figures and 47.2 percent shooting, more signs of the defensive slippage that the Bulls have been exhibiting even in victories.

The Bulls, led by Luol Deng’s 24 points, staged one last comeback, pulling to within 92-88 on a long Deng jumper with 1 minute, 11 seconds left — a shot on which Deng tried to shoot a 3-pointer.

But Courtney Lee, just 3-for-13 to that point, sank a stone-cold fallaway jumper with 51 seconds left and Kyle Korver followed with a turnover and loose ball foul. Dragic hit one of the two ensuing free throws.

The Bulls led comfortably 51-40 at halftime thanks to another strong performance from the Bench Mob. John Lucas III’s six second-quarter points led a balanced effort as all five reserves scored and the Bulls enjoyed a 29-14 advantage in the quarter. The Rockets even went 8:40 between field goals.

But a Luis Scola to Chase Budinger alley-oop highlighted a 14-1 Rockets’ run in the third that pulled them even. And Budinger went nuts to start the fourth, sinking three 3-pointers during a 13-2 run. By the time Earl Boykins sank a 3-pointer, the Rockets had seized a 14-point lead at 89-75.

The Bulls dropped to 14-7 without Derrick Rose, who sat again with his groin injury.

Hamilton, who wore a large, protective pad on his right shoulder, didn’t play again after exiting with 4:52 left in the third quarter.