The Wait Is Over For Lucious And Clyburn 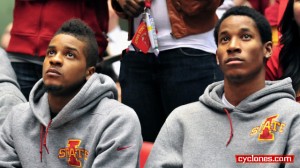 AMES, Iowa- The long wait is over for future Iowa State stars Korie Lucious and Will Clyburn. Their final season in collegiate basketball has officially begun, and both couldn’t be more excited.

The duo sat out last season after transferring from other schools, Lucious from Michigan State and Clyburn from Utah. They sat and watched Iowa State record one of its finest seasons in school history en route to its first NCAA Tournament berth since 2005. Now they are ready to make their own mark and continue the program’s success.

“I’m excited,” Lucious said. “Any competitor that’s been sitting out as long as I have should be anxious to get back out on the court.”

“It’s really exciting,” Clyburn added. “The year went by really fast and they told me it would go by quickly.  Now it’s my turn. We have a couple more months and then my time is here.”

Sometimes it’s easy for fans to forget about redshirts, but it certainly wasn’t the case for the Iowa State coaching staff. They witnessed every day what Lucious and Clyburn will bring to the table next year as members of the 2011-12 Iowa State scout team.

Both possess unique abilities. Lucious is a true point guard, a leader and a seasoned veteran who has experience competing at the highest level. A native of Milwaukee, Wis., Lucious played 2 ½ years at Michigan State where he handed out 239 assists and scored 439 points while playing in two Final Fours. A highlight of his Spartan career was his 3-pointer at the buzzer which defeated Maryland, 85-83 in the second round of the 2010 NCAA Tournament.

“I’m going to try to bring a true point-guard mentality, get guys involved and look for shots for myself when it’s there,” Lucious said. “But my main thing is winning, so I’m trying to bring that leadership and all the experience I have from the NCAA Tournaments and playing in Final Fours to the table here.”

Lucious’ friendship with Chris Allen, a former teammate at Michigan State, and former Cyclone Diante Garrett, a fellow native of Milwaukee, helped steer him toward Iowa State. The year off helped him get acclimated into the program.

“I learned more about the team, the program, coach Hoiberg and everybody else around me,” Lucious said. “I also got a feel for the guys and what kind of players they are and what my role will be next year. I just really tried to focus on whatever I could do to help the team.”

“He’s (Lucious) an exciting player,” Clyburn said. “You never know what he’s going to do. He’s quick, he can really shoot it and he can really handle it. He’ll have you looking crazy out there.”

A native of Detroit, Mich., Clyburn has taken a different route to Iowa State. A lightly recruited prospect out of high school, Clyburn spent two seasons at Marshalltown Community College where he earned first-team All-Region XI accolades in 2010. He then transferred to Utah (2010-11), where he posted outstanding numbers, averaging 17.1 points and 7.8 rebounds while earning All-Mountain West and All-District (NABC) honors. He also made 40.3 percent (62-154 3FG) of his shots from beyond the arc.

Clyburn is the long, athletic wing (6-7, 205) which every team covets. He’s ready to make an impact next season.

“It was very difficult sitting out and I wanted to be out there with my teammates,” Clyburn said. “I did learn a lot this past season. Just seeing how everyone bought into everything that coach Hoiberg was talking about and I’m going to do the same.”

His scout team partner is impressed with Clyburn’s game.

“Oh man, he’s smooth,” Lucious said. “He’s 6-7, long and gets a lot of rebounds. He can put the ball in the hole at will. He’s an all-around player. He’s a good player and it’s going to be fun playing with him.”

The tandem had the luxury of watching the Cyclones achieve huge success this past year, forming a bond and friendship.

“While the team was on the road, Korie and I spent a lot of time together working out,” Clyburn said. “We have a lot of classes together so we were always right by each other just getting to know each other a lot better.”

“We became very close,” Lucious added about his friendship with Clyburn. “Sitting on that sideline every game and practicing together every day, we had each other’s back the whole year. We kind of felt we had to be there for each other, to talk to each other through all the hard times and everything because it’s hard for any player to sit out for a whole year. We just came together and we’re getting along real well.”

They also witnessed four transfers, Royce White, Chris Allen, Chris Babb, Anthony Booker, who all sat out the 2010-11 season, thrive in their new environment. Iowa State head coach Fred Hoiberg’s plan is on target, and it breeds optimism for Lucious and Clyburn.

“They (the transfers) set the bar really high,” Lucious said. “We got back to the tournament after seven years, so they set the bar high. I saw what they were able to do as transfers, and coach Hoiberg did a great job with them. I’m just trying to come in and hope to do the same thing.”

Both will remain in Ames this summer, attending classes and playing in the Capital City League in Des Moines. Their goal now is to continue to improve and be as fully prepared for October 15th on the first day of practice.

“I’m going to live in Ames and play in the Capital City League just like last year,” Lucious said. “We are already preparing for next year, working out as much as possible and trying to stay in shape. I can’t wait.”

“I’m very excited,” Clyburn added. “We will have a good team. We had a good team last year, and I think we can have a great team next year with the pieces we’ll have.”