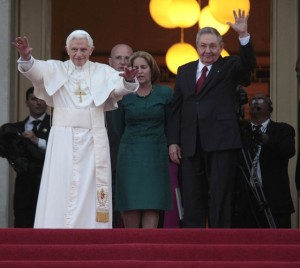 HAVANA — Pope Benedict XVI’s whirlwind trip to Cuba neared its Wednesday climax — a papal Mass in Havana’s massive Revolution Square — after a day of largely private events Tuesday that were remarkable as much for their symbolism and irony as for their substance.

The day began with the pope kneeling in the sanctuary of Cuba’s patron saint, Our Lady of Charity, in the mining town of El Cobre, where he prayed, in what might have been a gentle jab at Cuba’s authoritarian government, that “nothing or no one take away the inner joy so characteristic of the Cuban soul.”

The day ended 500 miles away with a private meeting with Raul Castro, Cuba’s Marxist president, who gave the pope a replica of that same patron saint as a gift. The pope gave the atheist Castro a 15th century atlas from the Vatican library.

The public events, too, offered scenes at least unexpected, if not jarring.

In Havana’s 300-year-old Cathedral of the Virgin Mary of the Immaculate Conception, the archbishop of Miami, a city whose population is largely made up of refugees from the rule of the Castro brothers, celebrated a special Mass in which he referred to Marxism as “a spent ideology.” When he finished, Archbishop Thomas Wenski received a standing ovation that lasted at least two minutes.

Even the crowds that lined streets to glimpse the pope seemed other than what was expected — they were overwhelmingly young, a welcome break, Vatican officials said, from the scene in Europe, where religion seems mostly a refuge for the old.

“For us who come from Europe, it is a different world,” the Rev. Federico Lombardi, the Holy See’s chief spokesman, told McClatchy Newspapers. Among the European faithful, Lombardi, 69, joked, “I am a youngster.”

What the pope and Raul Castro spoke about during their 40-minute talk was private, Vatican officials said. The two spoke through interpreters, which lengthened the meeting. Raul’s older brother, Fidel, did not make an appearance, the Vatican said, though a meeting with the longtime dictator who turned power over to Raul in 2006 was still possible.

“The pope will be here until tomorrow in the afternoon. So the possibility still exists. He’s still open and available for a meeting,” Lombardi said.

Elsewhere in Havana, enthusiasm seemed to be building toward Wednesday’s open-air Mass, though how many Cubans would be able to make it through the tough security procedures was an open question.

Residents said security was noticeably tighter throughout Havana, with the number of police on street corners much higher than usual. Access to Revolution Square is expected to be limited and several roads around the plaza will be closed for hours leading up to the event.

“It’s almost like God is visiting the country,” said Yasser, a 27-year-old bartender in downtown Havana who declined to give his full name. “There are countries where the pope has never visited.”

Benedict spent Monday night in the former mining town of El Cobre, about 20 minutes west of Santiago, the first stop on his Cuban odyssey, where on Monday he celebrated an outdoor Mass for tens of thousands of enthusiastic Cubans.