Pope arrives in Havana to meet at least one Castro 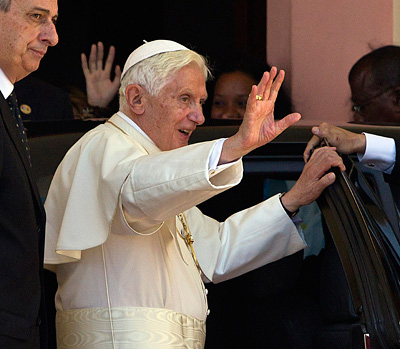 The pope was greeted by children dressed in white, who presented him with flowers at the Jose Marti International Airport.

(PHOTO: Pope Benedict XVI waves farewell to the folks of Santiago de Cuba on the steps leading up to the original statue of Our Lady of Charity, located in the Sanctuary of El Cobre on Tuesday, March 27, 2012.)

Earlier, Benedict prayed at Cuba’s holiest shrine, the Our Lady of Charity Basilica, which honors the patron saint of the island.

“May nothing or no one take from you your inner joy, which is so characteristic of the Cuban soul,” he said.

Benedict has been using his trip, only the second time a pontiff has visited the communist-ruled island, to deliver a subtle but pointed message on behalf of change and human rights. On Monday, during an open-air Mass attended by thousands, he told Cubans to build “an open society, a better society.” And he has said Cuba’s Marxist model is outdated.

Raul Castro, in welcoming the pope Monday to Santiago, defended the regime’s careful economic transition. “The nation is invariably continuing to change everything that needs to be changed, in keeping with the highest aspirations of the Cuban people,” he said.

It remains to be seen how hard the pope will press Castro on human rights and a wider role for the church when they meet later Tuesday. Also, it was widely assumed Benedict would also meet with Fidel Castro, Cuba’s former president and leader of its socialist revolution in the 1950s. Both Castros were raised as Catholics and went to Catholic schools as children.

The pope’s visit comes at a time of evolving and improving relations between the state and the Roman Catholic Church. Once marginalized and repressed, the church today has a growing voice in human rights and social-policy issues.

Cuban officials say they welcome suggestions from well-meaning outsiders on improving the country’s socialist economy, but made it clear on the eve of the pope’s arrival that they are not contemplating wider political change.

“In Cuba, there’s not going to be political reform. In Cuba, we are talking about updating the Cuban economic model to make our socialism sustainable, and that has to do with the well-being of our people,” Marino Murillo, a Cuban economic official, told reporters in Havana Tuesday, sounding a defiant note.

Murillo is overseeing a series of reforms that are aimed at improving productivity by making it easier for residents to open businesses, hire employees and, for the first time, to buy and sell private homes.

Murillo said it was essential for Cuba to step up productivity to satisfy the economic demands of ordinary Cubans and state-run enterprises and avoid having to import from abroad.

Although Cuban officials put new pavement and paint on a couple of streets the pope is expected to travel, there were few other outward signs Tuesday of a papal visit in the making. Posters bearing the pontiff’s image were hung on scattered utility poles around the downtown area, but for the most part, life in Havana seemed little different from any other day.

Officials have constructed a massive altar and hung yellow-and-white banners along the sprawling Plaza de la Revolucion, a site over the years of countless public celebrations of the revolution that brought Fidel Castro to power in 1959. Benedict is scheduled to deliver a Mass at the plaza Wednesday morning — an event viewed as the high point of his Cuba trip.

Though the mood appeared subdued, some residents said they looked forward to hearing what the pope would say to Cuba and the world. Some said they hoped he would make a forceful call to end the U.S. economic blockade of Cuba — a plea also made by Pope John Paul II when he visited Cuba in 1998, the last time a pope visited Cuba.

“We are hoping for a miracle,” said Rafael Rodriguez, who was selling fluorescent light bulbs from a stool in the picturesque but crumbling Old Havana section of Havana. “The pope can be a mediator for peace and tranquility.”