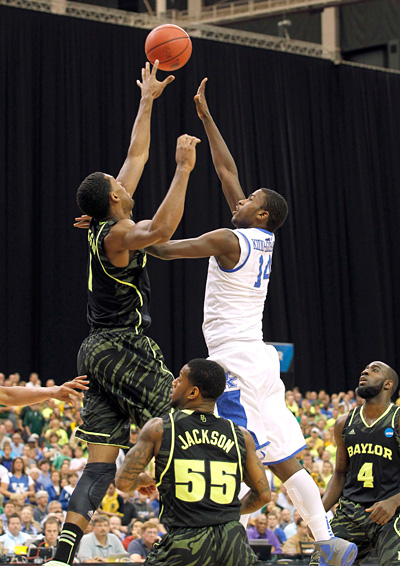 But top-seeded Kentucky quickly turned that into a faded memory with a 16-point flurry that took the Bears out of the NCAA Tournament and underscored the difference between a team ready to play for a national championship and one that still lacks the final pieces to make it happen.

In what became a decisive battle between two of the nation’s most athletic front lines, Kentucky’s big guys showed up in full force. Baylor’s lone meaningful contribution while the game remained in doubt came from senior Quincy Acy.

Kentucky showed fire and passion from the opening tip. Baylor, with the notable exception of Acy, waited until the second half.

And by then, it was much too late. Wildcats center Anthony Davis and forward Michael Kidd-Gilchrist had their way in the first half, combining for 31 points in helping the Wildcats build a 20-point edge at intermission. Kentucky coasted home with an 82-70 victory at the Georgia Dome, maintaining a double-digit lead for the final 31 minutes.

Baylor (30-8), which never recovered from the Wildcats’ 16-0 surge in the first half, spent much of the post-game news conference muttering about missed chances and a slow start no one could explain.

“It’s like they had more fight than us,” said forward Perry Jones III, who scored 15 of his 17 points in the second half, after Kentucky had the game under control. “We could have played a lot tougher and a lot harder at the beginning of the game. We should have.”

“I don’t know,” Jones said, his voice trailing off.

Let that unanswered question be the epitaph to this Baylor season. But it happened. And Jones was not alone.

Fellow forward Quincy Miller made a 3-pointer to give the Bears a 10-5 lead, then never scored again. Guard Brady Heslip, the team’s leading scorer in the NCAA Tournament, was blanketed by Kentucky’s Doron Lamb to the point that he took only two shots (making one) in 26 minutes. If not for Acy, who scored 10 of his team-high 22 points in the first half, the Bears would have found themselves in an even deeper ditch than 42-22 at intermission.

“In the first half, we just got down on ourselves and let them take it to us,” point guard Pierre Jackson said. “In the second half, we came to play. But it was a little too late.”

By then the Wildcats (36-2), who eventually stretched the lead to 51-28 with 16:41 remaining, were operating in clock-kill mode. Their fans, who turned the Georgia Dome into a home game for the Big Blue, were counting down the seconds to next week’s Final Four showdown against rival Louisville. And Acy, the lone senior in the Bears’ starting lineup, was puzzled by why he was the only guy who seemed ready to mix it up with Kentucky when the game was there for the taking.

If the Bears had played the full 40 minutes as they did the final 20, Acy said: “It would have been a different game. I believe that 100 percent.”

But the reality is that Jones, Miller and Heslip combined for five points in the first half. Kentucky’s inside duo of Davis and Kidd-Gilchrist had 31 by that time, with guard Darius Miller adding four more.

By the time other Baylor players became comfortable enough in their surroundings to join the battle with Acy, it was too late. You could blame that on Baylor’s inexperience, with four first-year players in the starting lineup. That’s part of the story.

Or you can acknowledge that Kentucky, the nation’s top-ranked team, has the most talented, deepest lineup in the land. And, once the Wildcats got their transition game going in the first half, they were not going to be slowed by anyone.

That was the postgame take of Baylor coach Scott Drew, who watched the Wildcats’ heralded front line strike for double figures across the board while combining for 25 rebounds. Kidd-Gilchrist (19 points, 5 rebounds) and Davis (18 points, 11 rebounds) led the charge, with Terrance Jones adding 12 points and nine rebounds.

“Their front line.… was even better than I thought,” Drew said. “And I thought they were very good coming in. They’re very difficult to guard. And they’re impossible to guard in transition. Impossible.”

Drew said he does not envision anyone slowing the Wildcats on their way to a national title next week in New Orleans.

“If Kentucky plays their best basketball, nobody is going to beat them,” Drew said. “Kentucky is just at another level. And we didn’t have our A-game. We didn’t give ourselves a chance to win today.”

Certainly not after the first four minutes.