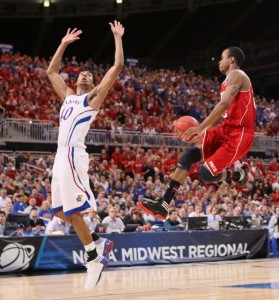 ST. LOUIS — Kansas finally looked loose and appeared comfortable early in the second half Friday night when guards Travis Releford and Tyshawn Taylor wandered out of a timeout chatting and laughing.

(PHOTO: North Carolina State’s Lorenzo Brown, right, passes behind Kansas’ Kevin Young to a teammate under the basket in first-half action of N.C. State’s 60-57 loss to Kansas in the NCAA Tournament’s Midwest Region at the Edward Jones Dome in St. Louis, Missouri, on Friday, March 23, 2012.)

Breathing room, at least a small mouthful, had arrived while North Carolina State remained immersed in a timeout forced by a quick burst by the Jayhawks.

The previous three halves of the NCAA Tournament had been a struggle for Kansas, which led its previous win over Purdue for all of 45 seconds. At halftime of a Midwest Regional semifinal at the Edward Jones Dome, the Jayhawks trailed the 11th-seeded Wolfpack by a point.

Friday’s exhale nearly turned out to be a false sense of security. But while it never was easy, Kansas did enough in the second half to pull out a 60-57 win over North Carolina State in front of a partisan Jayhawks crowd.

Kansas used a 12-2 run to open the second half to gain some semblance of control, eventually building its lead to 10 points. But North Carolina State battled back to pull within a point with under a minute remaining.

With a chance to tie in the closing seconds, Richard Howell’s desperation 3-pointer fell well short.

“We felt too comfortable because we let them get back in the game,” Releford said. “Once we get leads like that, we have to maintain them instead of getting comfortable and letting teams get back in it.”

The Jayhawks advanced to the regional championship game, where they will face North Carolina on Sunday at 4:05 p.m. Kansas and North Carolina will meet for the fifth time in an NCAA Tournament game and the first outside of the Final Four.

Withey’s 10th block came on Leslie in the final minute with the outcome hanging in the balance.

“I wish it had been a triple-double, but 10 blocks feels great,” Withey said. “I’m glad my play helped us win the game.”

Said guard Elijah Johnson: “He might have only touched 10, but he altered probably 20.”

The Wolfpack were hurt when Leslie had to sit a large chunk of the second half with four fouls, and the Wolfpack made two of 14 shots while he was on the bench. His return with 7 minutes, 23 seconds remaining sparked the comeback.

Kansas won despite a poor offensive game that saw the Jayhawks shoot 37 percent, make one of 14 3-pointers and hit only 11 of 20 free throws.

North Carolina State was a borderline NCAA Tournament team for a while, especially when the Wolfpack suffered a four-game losing streak, including losses to the ACC’s top four teams to fall to 18-11.

But they entered Friday’s game having won six of seven, the only defeat in that run being by two points to North Carolina in the conference tournament semifinals.

Kansas earned the most advantageous path possible in its bid to reach the Final Four, playing in Omaha, Neb., in the first two rounds. But for the second consecutive game, the Jayhawks were sluggish to start in front of a crowd that was pro-Kansas.

Although the Jayhawks shot 34 percent, they continually were able to grab offensive rebounds that they converted into 13 second-chance points before the intermission.

Robinson asserted himself about midway through the half, scoring seven points during a 12-0 burst as Kansas was able to lead in the first half for the first time since its tournament opener. He had 11 points and nine rebounds in the half.

But his teammates didn’t offer much offensive support. Kansas missed all eight of its 3-pointers in the half and Taylor, the team’s second-leading scorer on the season, made one of nine shots.

Leslie scored 12 in the first half to keep the Wolfpack close. He then scored the final points before the break to give North Carolina State a 33-32 lead. The Wolfpack matched Kansas’ 34 percent shooting in the first 20 minutes and struggled to convert around the basket as Withey blocked seven shots.